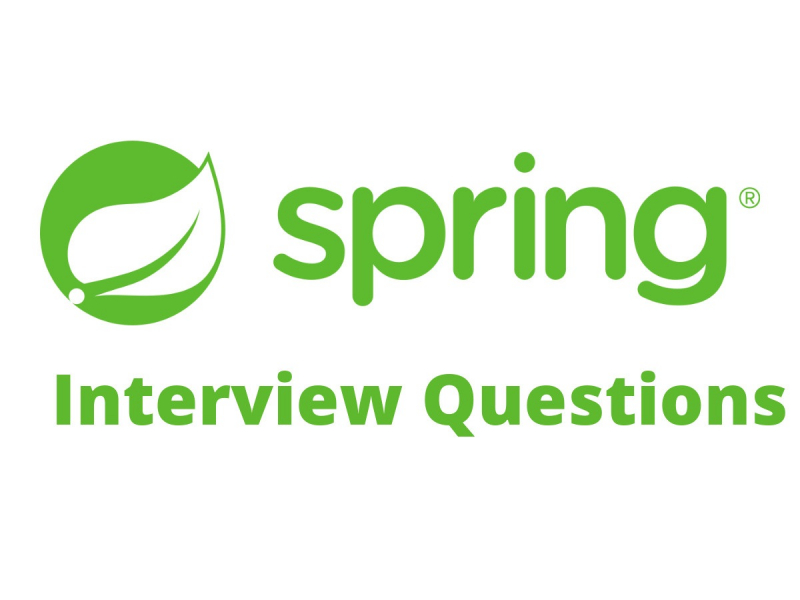 Spring is an open source development framework for enterprise Java. The main features of spring may be used for developing applications of Java. Also, extensions for making web applications on top of JavaEE platform can be done. The main goal of spring is to make the development of J2EE development a lot easier to use and promote a programming practice by making use of POJO-based models. Spring is a lightweight framework. It can also be termed as the framework of frameworks because it also provides to other frameworks like EJB, JSF, Tapestry, Hibernate etc. This framework is defined as a structure using which we can find the solutions to various technical problems. It comprises many modules like ORM, DAO, AOP, WEB MVC etc.

We hereby provide you with some questions on spring. These Spring Interview Questions have been specially designed so that it will help you to understand the nature of questions you may encounter while you are in an interview and the subject is spring.

In many interviews, interviewers start questioning the basic concept and then ask questions based on how you answer the basic ones.

Below are the list of Best Spring interview questions and Answers

1) What are the features/ characteristics of spring?

The important features of spring are as follows:

2) How many types of modules are there in spring? Name them.

There are around twenty modules, which can be categorized into Core Container, Web, Data Access or Integration, Aspect Oriented Programming and Instrumentation and Test.

3) What do you mean by Spring Java Based Configuration?

Spring configuration files are XML files. These files contain the information of classes and describe how these classes can be configured and merged to each other. Java based configuration is a feature which enables the user to write most of their spring configuration without using XML. Instead, they are written with the help Java-based annotations.

For example, Java Annotation @Configuration is used to indicate that Spring IoC container can use the class, which is a source of bean definitions.

4) What are the advantages of spring?

There are many advantages of spring. Some of them are as follows:

5) What are the various components of a spring application?

6) What are the various ways in which Spring Framework can be used?

There are many ways in which Spring Framework can be used. They are listed as follows:

7) What do you mean by Spring IOC Container?

At the center of the Spring Framework, lies the spring container. It is the container, which creates the object, wires them together, makes necessary changes in them and manages their entire life cycle. The spring container uses the Dependency Injection to manage the elements that the application is made up of. The container gets the instructions for which objects to assemble, instantiate and configure and by reading the modification metadata provided. This metadata is provided either by XML, Java code or Java annotations.

8) What are the types of Dependency Injection supported by spring?

There is two Dependency Injection that is supported by spring.

9) What are the differences between constructor injection and setter injection?

10) What are the differences between Bean Factory and Application Context?

The differences between Bean Factory and Application Context are as follows:
Take Free: Spring MCQ & Quiz

AOP or Aspect oriented programming is a technique in programming with the help of which programmers can modularize the crosscutting concerns or change the behavior that cuts across the various divisions of responsibility. Some of the examples of crosscutting concerns are logging well as transaction management. The center of AOP is an aspect. This encapsulates behaviors that can affect multiple classes into modules that can be reused.

12) What is an Advice?  What are the different types of Advices?

An Action, which is taken by any aspect at a particular join point, is called an Advice. AOPs use an advice as an interceptor that maintains a train of interceptors near the join point.
Various types of advice are as follows:

13) What do you mean by spring beans?  What does bean scopes spring support? Explain each.

The objects, which are most important for the user’s application and are managed by the containers of Spring IoC are called beans. A bean is an object that is initialized, put together, and is managed by a Spring IoC container. The beans are created with the help of configuration metadata that are supplied to the container by the users.

The Spring Framework makes use of five scopes. Three of these scopes are valid only if it is in the form of a web-aware Application Context.

14) In how many ways, can one configure Spring into an application?

One can configure spring into an application using three different ways. They are:

15) What are the disadvantages of auto wiring?

Following are the disadvantages of auto wiring:

A module in spring which contains a set of APIs, which provides for crosscutting requirements is an Aspect. For example, a module that is used in logging is called AOP aspect for logging. Any application can have as many aspects as per requirement.

18) What is a bean definition made up of?

The bean definition is made of the information called configuration metadata, which is required by the container to have knowledge about the followings −

On what factors Bean’s lifecycle depends

Pointcut is a collection of one or more join points where one advice can be executed. One can specify pointcut using patterns as well as expressions.

20) What does Weaving mean?

Weaving is the process by which aspects can be linked with other application objects for creating the required object.

21) How to use spring boot to configure different datasources ?

22) Explain Inversion of Control, how to implement it.

23) Explain What is Spring MVC?

Spring MVC is a framework of Java used for developing web applications. It follows the design pattern of Model-View-Controller. A spring MVC gives an optimum solution to use the spring framework along with MVC. To do so, it takes the help of the DispatcherServlet that receives the incoming request and then implements it to a suitable resource including controllers, views, and models. Spring MVC has a number of advantages such as rapid development and ease of testing.

24) Explain Dependency Injection and its types?

Dependency injection is way to pass one obeject dependencies to another object.It is a broader form of inversion of control (IOC).

There are basically 3 types of dependency injection:

25) What is difference between Getmapping and Postmapping in Spring?

Major difference between Getmapping and Postmapping

Its request method can be framed as method= RequestMethod.GET. Getmapping is a newer annotation that has been developed to overcome the drawbacks of the previous requestmapping. It supports several attributes such as consume like @requestmapping. It is used to determine or map the GET & POST requests together and its method attribute is also not specified as getmapping maps to HTTP Get method always. This is composed of notation that acts as a shortcut for @requestmapping (method = RequestMethod.Get) it is used to get the requests on well defined and specific handler methods. In this notation it supports consumes where the options are-

It is used to map out the Get requests only and its method attribute is also not specified as postmapping always maps HTTP post methods. It is composed of a notation that acts as a shortcut for @requestmapping ( method= RequestMethod. Post). When we talk about the shortcut for @requestmapping we talk about @postmapping, it is a composed annotation that can act as it’s shortcut as @ReqeustMapping(method= RequestMethod.POST).

In Spring, an aspect is a class that performs enterprise application interests that cut across various classes, such as transaction management and its role looks and smells like it should have structure, but you can't find a way to represent this structure in code with conventional object-oriented techniques. Aspects can be a regular class configured through Spring XML configuration or we can use Spring AspectJ integration to define a class as Aspect employing @Aspect annotation.

These questions and answers on Spring are curated from various information sources to ensure that the reader is exposed to the variety of interview questions. Every interviewee must be aware of these basic questions and answers while applying for any designation or post in the application development sector. Besides these, questions may be asked about the commands for installation, initialization or execution. Interviewees may also enrich their answers with their own experiences.