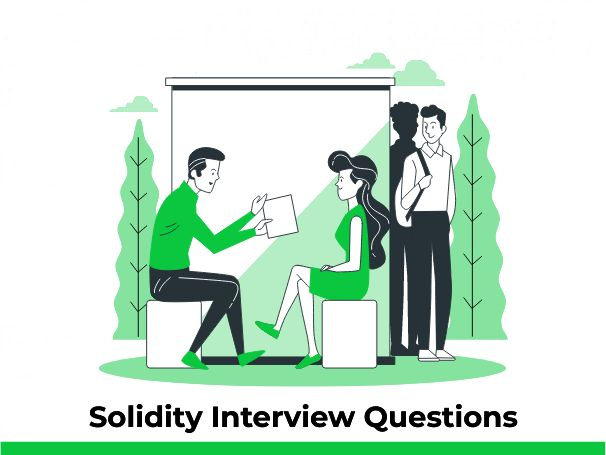 Solidity is a high-level, statically-typed programming language for writing smart contracts that run on the Ethereum Virtual Machine (EVM). It was developed specifically for the Ethereum platform but has since been used to write smart contracts for other blockchain platforms as well.

This is used to write smart contracts, which can be used to facilitate, verify, and enforce the negotiation or performance of a contract. It is a contract-oriented, Turing-complete programming language, which means that it can be used to write a wide variety of programs and execute them on the Ethereum blockchain.

Here are the top 12 Solidity Interview Questions with Answers that you could use to test your interview preparation for the Solidity Job Interviews.

As a Solidity developer, some of the key responsibilities you may be expected to have include:

Below are the list of Best Solidity Interview Questions and Answers

1) What are the main features of solidity?

The main features of Solidity are as follows -

Stateful smart contracts: Solidity allows you to create and manage digital assets, and maintain the state of a smart contract through storage variables.

Types and units: Solidity supports various types such as integers, booleans, and addresses, and also has built-in units such as wei, ether, and time.

Event logging: Solidity allows you to emit events, which can be used for logging and debugging, or for triggering external actions.

Error handling: Solidity has built-in error handling mechanisms such as require() and assert() which can be used to validate conditions and throw exceptions.

Gas mechanism: Solidity operates on the Ethereum blockchain, which uses gas as a mechanism to pay for the execution of smart contracts on the EVM.

2) Explain the concept of gas in Ethereum?

Gas refers to the fuel that is used to power transactions and smart contract execution on the Ethereum blockchain. Every operation on the EVM requires a certain amount of gas, and the cost of gas is measured in Ether (ETH). When a transaction is sent, the sender must include a gas limit and a gas price, which determine the maximum amount of gas they are willing to pay for the transaction to be processed.

3) What is Solidity and what is it used for?

Solidity is a high-level, statically-typed programming language for writing smart contracts that run on the Ethereum Virtual Machine (EVM).

It is a contract-oriented, Turing-complete programming language, which means that it can be used to write a wide variety of programs and execute them on the Ethereum blockchain. It is a key tool for developers working with the Ethereum platform and other blockchain-based systems.

4) Enlist the major difference between a contract and a library in Solidity?

In Solidity, a contract is a unit of code that can contain data and functions that can be invoked and interacted with. A contract can be used to represent a real-world entity, such as a token, an agreement, or a voting system.

Here are some key differences between contracts and libraries in Solidity

5) How to create a contract in Solidity?

To create a contract in Solidity, you can follow these steps:

Step 2 - Declare any state variables that the contract will need to store data.

Step 3 - Define any functions that the contract will need. Functions can have different visibility levels, such as public or private, which determine whether they can be called from outside the contract.

Step 4 - Optionally, you can also define events that the contract can emit to signal to external clients that something has happened.

That's the basic structure of a Solidity contract. You can add more variables and functions as needed to suit your specific needs.

6) What are the different types of data that can be stored in a Solidity contract?

Solidity provides a number of built-in data types that can be used to store data in a contract. Here is a list of the most commonly used data types:

In addition to these basic data types, Solidity also supports more complex data structures such as arrays, mappings, and structs.

7) How to declare a function in Solidity and what are the different visibility levels that can be used?

To declare a function in Solidity, you can use the 'function' keyword followed by the function name and a list of parameters within parentheses. For example:

This creates a function called 'myFunction' that takes two arguments: a 'uint' (unsigned integer) and a 'string'.

Here is an example of how these visibility levels can be used:

8) What are the different types of control structures available in Solidity?

9) How to handle errors and exceptions in Solidity?

In Solidity, errors and exceptions are handled using the 'require' function and the 'revert' function.

The 'require' function is used to check for a condition and throw an exception if the condition is not met. It can be used to enforce preconditions and postconditions on function arguments and return values. For example:

Both the 'require' function and the 'revert' function will cause the current function to throw an exception and revert the state of the contract. If the exception is not caught and handled, it will propagate up the call stack until it is caught by the calling contract or client.

10) What is the Solidity compiler and what is it used for?

11) What is the difference between a contract and an interface in Solidity?

In Solidity, a contract is a unit of code that can contain data and functions that can be invoked and interacted with. A contract can be used to represent a real-world entity, such as a token, an agreement, or a voting system.

Here are some key differences between contracts and interfaces in Solidity:

12) What is the Solidity Remix IDE and how is it used?

Solidity Remix is an online Integrated Development Environment (IDE) for writing, testing, and deploying Solidity contracts. It is a web-based tool that allows you to write, compile, and debug Solidity code directly in your web browser.

The Solidity Remix IDE includes a number of useful features, including:

To use the Solidity Remix IDE, you can simply go to the website and start writing your Solidity code in the code editor. You can then use the various tools and features of the IDE to compile, test, and debug your code.