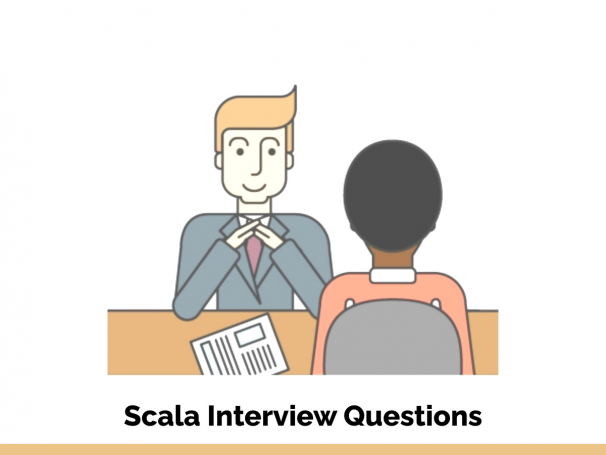 Scala is a high-level programming language that combines object-oriented and functional programming in one concise. finally, Practice here the Top 30+ Scala Interview Questions, which are mostly asked during scala job interviews. these interview questions are very popular and written by industry experts.

Below are the list of Best Scala Interview Questions and Answers

1) Explain what is Scala?

Scala is a general-purpose high-level programming language that combines object-oriented and functional programming in one concise. Scala was designed by Martin Odersky and supports Inferred, static, strong, structural typing discipline.

By default, immutable map is supported by scala. To use the mutable map, the programmer needs to import the “scala.collection.mutable”. It is an explicit class. “mutable.map” is the syntax for using the mutable and immutable class in the same program. To access the immutable class, we just have to use the name of the map and it can be accessed.

3) List the advantages of using scala over other functional programming languages.

Some of the advantages due to which scala is preferred over other functional programming languages are listed below:

4) Tell the advantages of companion objects when used in Scala?

5) Which Scala library is used for the functional programming?

pure functional data structure is present in the scala library. It also complements the standard Scala library. It also has a pre-defined set of foundational type classes’ like- Monad, Functor, etc. The standard library of Scala is automatically set as a dependency by default. The Scala library is used for compiling scala sources and for that it needs to be on the classpath.
Download Free : Scala Interview Questions PDF

6)  Differentiate Nil, Null, None, and Nothing in scala.

The difference between these four attributes in scala is given below:

7) What do you mean by a case class in scala?

These classes in scala are the classes which are declared by using a special modifier case. The constructor parameters are exported using these case classes which hence provide a recursive decomposition mechanism through pattern matching. We treat the constructor parameters of the case classes as public values and so they can be accessed directly. The companion objects and its related methods can also be generated automatically for the case classes. All the methods in the class and the companion objects are generated based on the parameter list. It helps in automatically generating the methods from the parameter list. By default, case objects and classes are serializable.

8) What do you understand by apply and unapply methods in scala?

These methods in scala are used for mapping and unmapping the data between the form and model data.

The differences between array and list in Scala are listed below-

10)  What do you understand by an implicit parameter in Scala ?

11) What do you understand by tail recursion in Scala ?

The programmers face various situations where they need to write codes which are recursive in nature. But when we use the recursive functions, we may face a problem in which the function may eat up all the stack space. So, to overcome this problem, Scala provides this particular feature of tail recursion which optimizes the recursive function. After optimization, these functions do not create a new stack space, instead uses the current function stack space. “@annotation.tailrec” annotation has to be used before defining the function and for the last statement, recursive call can be used. After all this, your function will be compiled successfully or else it will give an error.

Predef in Scala is used for providing type aliases for the commonly know scala types such as collection types Map, Set, and the List constructors.

13) Explain what is Unit in Scala?

Unit is a type in Scala that is used as a return statement for a function when no value is to be returned. It is a subtype of scala.AnyVal.

In Scala, the Type Inference makes it optional to specify the type of variable provided that type mismatch is handled.

A Monad is an object that wraps another object in Scala that performs successive calculations such that the output of a calculation at any step is the input to other calculations, which run as a parent to the current step.

16) List the default imports are available in Scala Language?

The default imports in Scala language are:

imported - contains Int, Nothing, and Function

Bitset is a common base class for mutable and immutable bitsets. Basically, the bitsets are sets of non-negative integers that are represented as variable-size arrays of bits packed into 64-bit words.

18) Explain trait in Scala and its uses?

19) What is a higher-order function in Scala?

In scala, Higher-order functions take other functions as parameters or return a function as a result. As these functions are first-class values in Scala, for example, the map function on arrays.

Currying is a process of transforming a function in Scala. This function takes multiple arguments into a function that takes a single argument, therefore it is applied widely in multiple functional languages. It can be represented as : def function name(argument1, argument2) = operation.

There are four types of identifiers available in Scala:

Scala Option is a container for zero or one element of a given type such that it can be either Some or None object, which represents a missing value. Therefore it is referred to as a carrier of single or no element for a stated type.

24) What is auxiliary constructor in Scala?

In Scala, the auxiliary constructor is used for constructor overloading and therefore defined as a method in the class using this keyword or name.

In scala, the yield keyword is used to return a result after the completion of loop iterations. The for loop used buffer internally to store the iterated results and after finishing all iterations it yields the ultimate result from the particular buffer.

26) What do you mean by implicit parameters?

27) Explain the difference between a trait and an abstract class?

Basically, applicative functor forms a type class that can be implemented in Scala such that it allows applying a wrapped function to a wrapped value.

30) What is a companion object?

A companion object is an object that is declared in the same file as a class and has the same name as the class such that its class can access each other's, private members. It uses regular virtual methods which can be overridden through inheritance.

31) What is the difference between a Java future and a Scala future?

A Java Future works in a synchronous blocking way such that it is a bit clumsy, not elegant, and not concise.

Scala Future works in an asynchronous non-blocking way such that it supports very elegant and concise ways of writing concurrency code and support Concurrency and true Parallelism.

Akka in Scala is a toolkit and runtime for building highly concurrent, distributed, and fault-tolerant applications on the JVM and is written in Scala, with language bindings provided for both Scala and Java. Akka’s approach to handling concurrency is based on the Actor Model. In an actor-based system, everything is an actor, in much the same way that everything is an object in object-oriented design. A key difference, though – particularly relevant to our discussion – is that the Actor Model was specifically designed and architected to serve as a concurrent model whereas the object-oriented model is not or in other words, in a Scala actor system, actors interact and share information, without any presupposition of sequentiality. The mechanism by which actors share information, and task one another, is message passing.