What Is The Best Programming Language For The Mobile Application Development? 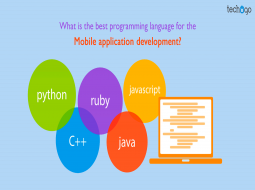 List of Top Programming Language For The Mobile App Development:

PHP
PHP (Hypertext Preprocessor) is an open-source language, developed by Zend technologies for server-side scripting. PHP makes it easy to work on servers because it is to learn and have procedural and object-oriented language. Initially, it is only used for website development but after some advancement developers use this technology for mobile application development.

C++
C++ is an object-oriented language, we can say that it is an extension of the C language. It is used for developing the mobile application for both the platforms iOS and Android. This programming language has a very big library that's why it is beneficial for application developers.

Objective-C
It is the primary programming language that is used to develop apps for OS X and iOS. It uses syntax, primitive type, and flow control statements of the C program.

Swift
Swift is the powerful and intuitive programming language introduced by Apple for macOS, iOS, watchOS, and tvOS. Swift makes it easy to write codes that is incredibly fast and safe by design. It is faster and easier to use Strings that retain Unicode correctness and add support for creating, using, and managing substrings.