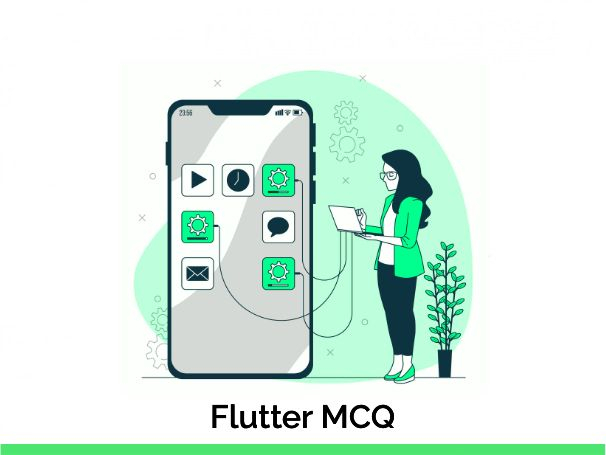 Practice here the 25+ most popular Flutter MCQ Questions, which are written by industry experts and commonly asked in Flutter exams or interviews. besides this, you can also download here Flutter MCQ PDF, completely free.

3. Which of the following widget is used for repeating content in Flutter?

4. Flutter's rendering engine is primarily written in which programming language?

6. Which of the following language is used to build flutter app?

8. A sequence of asynchronous events is often referred to as a stream.

9. Which element is used as an identifier in Flutter?

11. What are the features of Flutter?

12. Everything is a widget in Flutter. True or False?

14. Which of the following option is used to represent a collection of objects in Dart?

15. Which of the following is used to load image from flutter project’s assets?

View Answer
all of the above

19. What are the type of tests, that we can perform in flutter?

20. Which of the following animation allows us to represent real-world behavior in Flutter?

21. Flutter apps do not support the browser. It only supports Android and iOS platforms.

22. Which of the following is the project's configuration file that will use a lot during working with the Flutter projects?

25. Which of the following widget allows us to arrange its children in a table based widget?

Flutter is an open-source Mobile App development framework created by Google. It enables developers to create beautiful, native applications for both Android and iOS devices from a single codebase. Flutter provides a wide range of features and capabilities, making it an ideal choice for developers who want to quickly and efficiently create high-performance, feature-rich mobile applications quickly and efficiently. With its easy-to-use UI design language, robust APIs, and wide range of supported platforms, Flutter is quickly becoming the go-to platform for mobile app development.

Flutter was first announced by Google in 2017 at the annual Google I/O conference. The first stable release, Flutter 1.0, was launched in December 2018. Since then, Flutter has grown in popularity and is now used by developers worldwide to build mobile, desktop, and web applications.

Flutter was developed by the Google team and it was first named "Sky" and later changed to Flutter. The goal of Flutter was to create a framework that would allow developers to build high-performance, high-fidelity apps for mobile devices, desktops, and the web, that would look and feel like native apps. The framework uses the Dart programming language, which was created by Google specifically for use with Flutter.

Flutter's popularity has grown quickly, thanks to its ability to create beautiful, high-performance apps with a fast development cycle. Many companies and developers have adopted Flutter, including Google, Groupon, Alibaba, and many more.