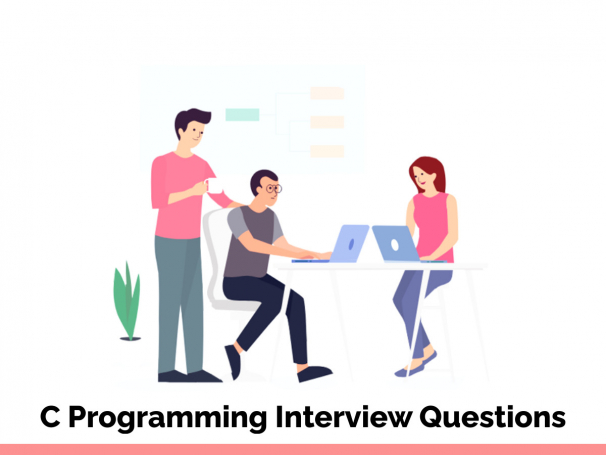 What is C Programming?

1) What are static variables in C ?

The output of the program is a sequence of numbers starting with 1, rather than a string of 1′s. The initialization of static variable Countis performed only at the first instance of the function call. In successive calls to the function, the variable count retains its previous value. However, these static variables are not accessible from other parts of the program.

2) What is a scope resolution operator in C ?

The scope resolution operator (::) is useful in C programming when both global and local variables have the same name, a statement using that name will access the local variable (more precisely, it will access the variable of that name in the innermost block containing that statement).
The scope resolution operator represented as :: (a double colon) can be used to select the global variable explicitly.

Consider the example below.

3) What is register variable in C language ?

A structure is a composite data type declaration that defines a physically grouped list of variables to be placed under one name in a block of memory, allowing the different variables to be accessed via a single pointer.

All variables declared within a function are auto by default. The extent of a variable is defined by its scope. Variables declared auto can only be accessed only within the function or the nested block within which they are declared. They are created when the block is entered into and destroyed when it is exited. i.e., memory is allocated automatically upon entry to a block and freed automatically upon exit from the block and note that default value is a garbage value.

Global Static variables are global to the file in which they are defined. They are used when the same global variable is referenced in each of the files and these variables must be independent of each other across the files. The use of global variables is not recommended, as function independence is one of the basic idea of modular programming. Global variables should be used only when it is inevitable (i.e., when all the functions need a particular variable).

When program spans across different files and we want to have a global variable accessible to all functions in these files, the keyword extern should be used before the data type name in the declarations in all these files where it is accessed except one. The linker requires that only one of these files have the definition of the identifier. Global variables definitions can occur in one file only.

Consider the following program example to understand better the use of keyword extern,

The code of the second file, mainfile.c is given below,

Upon encountering the above statement, the compiler knows that an integerglobalVarexists. It goes ahead to produce the object file. In the file mainfile.c, the actual definition of globalVar occurs with the statement.
int globalVar;

Note that no special keywords are necessary to say that globalVarspans across files. This is because a declaration such as the one shown above tells the compiler that the integerglobalVaris exported and can be accessed in different files.

7) What is the difference between #include <header file> and #include “header file” ?

The difference between these two is the location the compiler searches for the header file to be included. If the file name is enclosed in quotes, the compiler searches in the same directory in which the file is included. This method is normally used to include programmer defined headers. If the file name is enclosed in brackets which are used for standard library headers; the search is performed in an implementation dependent manner, normally through pre-designated directories. These both file inclusions one using angle brackets and the other using quotes in an include statement can be used in C and C++.

8) What are Derived data types in C ?

Derived data types are object types which are aggregates of one or more types of basic data types. below are the list of derived datatype in C Language.

The C preprocessor or cpp is the macro preprocessor for the C and C++ computer programming languages. The preprocessor provides the ability for the inclusion of header files, macro expansions, conditional compilation, and line control.

Recursion: A function, which calls itself, recursion is simple to write in program but takes more memory space and time to execute.

Enumerated types are used to define variables that can only assign certain discrete integer values throughout the program.

Enumeration variables are variables that can assume values symbolically

Declaration and usage of an Enumerated variable.

12) Differentiate call by value and call by reference ?

Call by value:
A process in which the values of the actual parameters sent by the calling function are copied to the formal parameters of the called function.

In Programming Languages data types are used to define a variable before its use.

Below are list of some basic data types in C language.

Typecasting is a way to convert a variable/constant from one type to another data type.

Consider the example shown below, the variable j declared in both main and the user defined function other func. Accessing j uses the local declaration in the called function.

The variables defined can be accessed only within the block in which they are declared. In cases of nested blocks, the variables declared in the outer blocks are accessible by statements in the inner blocks, and not vice-versa. These variables are called local variables because they are localized to the block. It helps to prevent the integrity of data (data of one function cannot be modified by another function, directly). It can be observed that if two variables of the same name are declared in many functions, they are distinct and unrelated variables. The scope of the variables in the function parameter list is also confined to the function, i.e., they are also local variables.

Continue is a jump statement that transfers control back to the beginning of the loop, bypassing any statements that are not yet executed. It can be used only in an iteration statement.

Array is a collection of variables of same type that are referred through a common name and a pointer is a variable that holds a memory address. pointers can point to array and array to pointers

Bit fields are used to store multiple, logical, neighboring bits, where each of the sets of bits and single bits can be addressed.

19) What are different storage class specifiers in C

NULL is used to indicate that the pointer doesn’t point to a valid location. Ideally, we should initialize pointers as NULL if we don’t know their value at the time of declaration. Also, we should make a pointer NULL when memory pointed by it is deallocated in the middle of a program.

Main Function is the function where every C program begins executing. it will usually call other functions to help perform its job, some that you wrote, and others from libraries that are provided for you.

The printf is a library function that prints output. requires the \n newline character, even separately like printf(“\n”);. The first argument is the string of characters to be printed, with each % indicating where one of the other arguments is to be substituted, and in what form it is to be printed.

24) Write program to remove duplicate in an array ?

Pointers are variables that are used to store addresses. The concept of the pointer is considered to be one of the difficult part of learning the C and C++ programming languages. There are several easy ways to write programs without pointers, but in case of dynamic memory allocation, the knowledge of pointers is a must.

Knowing about memory locations and addresses defined will enable you with the ideas of how every variable function in a program.

One can determine the exact size of a data type by using the sizeof operator. The storage size of the data type is obtained in bytes by using the syntax: sizeof(data_type).

28) What do you understand by normalization of pointers?

Normalization is the process by which an address is converted to a form such that if two non-normalized pointers point to the same address, they both are converted to normalized form, thereby having a specific address

29) What is the best way to store flag values in a program?

Flag values are used to make decisions between two or more options during the execution of a program. Generally, flag values are small (often two) and it tries to save space by not storing each flag according to its own data type.

The best way to store flag values is to keep each of the values in their own integer variable. If there are large number of flags, we can create an array of characters or integers. We can also store flag values by using low-order bits more efficiently.

Bit masking refers to selecting a particular set of bits from the byte(s) having many values of bits. Bit masking is used to examine the bit values and can be done by 'AND' operation of byte, bitwise.

31) Is there any demerits of using pointer?

Yes. As pointers have access to a particular memory location, the security level decreases and restricted memory areas can be accessed. Other demerits include memory holes, process and memory panics, etc.

32) Is there any data type in C with variable size?

Yes, Struct is one of the data type in C that have variable size. It is because the size of the structure depends on the fields which can be variable as set by the user.

Void pointer is a generic pointer in programming. If the pointer type is unknown, we make use of the void pointer.

34) When can you use a pointer with a function?

A pointer can be used with a function-

Sometimes the task we are required to do might not fit in the allocated data and code segments. Far pointers help to access rest of the memory inside a program. Far pointers are the information present outside the data segment (generally 64 kb). Such pointers are used when we need to access an address outside of the current segment.

36) What is difference between structure and union?

The differences between structure and union are as follows:

37) What is the differences between constant pointer and constant variable?

The differences between a constant pointer and the constant variable are as follows:

38) What is a palindrome number?

AVL tree is a binary search tree where the node difference of heights in either the right and left subtrees is less than or equal to one. Three developers by name Adelson, Velskii and Landi developed the technique for balancing the binary trees height. From the first letter of their names, (AVL) came to be. AVL tree has advantages such as low time complexity in inserting and deleting operations.

An array is a collection of the same data items, which are stored in a contagious memory location.

Few Differences Between C and C++