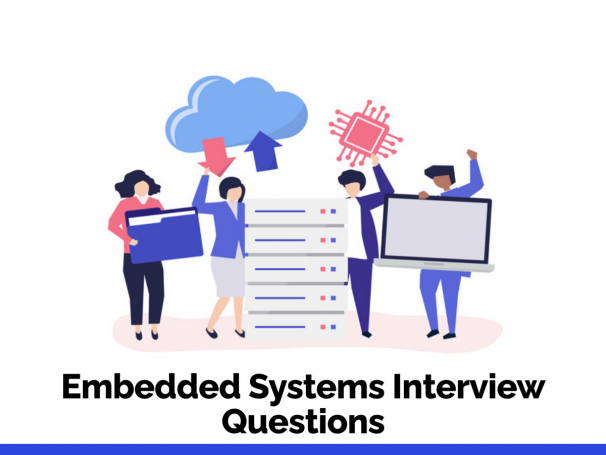 Semaphore is simply a variable that is non-negative and shared between threads. This variable is used to solve the critical section problem and to achieve process synchronization in the multiprocessing environment.

There are two types of Semaphores they are Binary Semaphore and Counting Semaphore.

Some advantages and disadvantages of an embedded system are as follows:

Some disadvantages of an embedded system are as follows:

3) Explian what is embedded system?

An embedded system is a hardware system attached with software that is designed to perform a dedicated function or a specific task, either as an independent system or as a part of a large system.

4) What are major components of embedded system?

There are three major components of an embedded system i.e. hardware, software, and operating system. The sub-division of these components are Processor, Memory, Timers counters, Communication ports, Output, and Input, etc.

5) What is difference between thread and process?

Process means a program that is under execution that runs in separate memory spaces whereas a thread means a segment of a process that shares information like data segment, code segment, files, etc. with its peer threads while it contains its own registers, stack, counter, etc.

6) What is RISC architecture?

7) What are major differences betwen CISC Vs RISC?

CISC: CISC stands for Complex Instruction Set Computer. In CISC the instruction set has various, different instructions that can be used for complex operations and the performance can be optimized with emphasis on hardware. It also eliminates the need for generating machine instructions for the processor.

RISC: RISC stands for Reduced Instruction Set Computers. In RISC The instruction set is reduced, and most of these instructions are very primitive and the performance is optimized which emphasized software. It uses a few simple addressing modes that use register-based instruction.

8) What is a watchdog timer?

A memory leak is basically a resource leak that occurs when programmers create a memory in heap and forget to delete it. It can cause serious issues as reduces the performance of the computer by reducing the amount of available memory which leads to system slowdown due to thrashing.

10) What is a segmentation fault?

Segmentation fault is a specific kind of error caused by accessing memory that “does not belong to you” and therefore causes programs to crash. It generally occurs when a program tries to read or write an illegal memory location.

11) What is interrupt latency?

In computing, Interrupt latency means the period that passes from during an interrupt is produced during the origin of the interrupt is sustained. For various operating arrangements, tools are sustained as shortly as the machine's interrupt handler is administered.

12) How can you reduce interrupt latency?

You can reduce interrupt latency by following the given rules:

13) What is the use of volatile keyword?

The volatile keyword is used to check the compiler from utilizing any optimizations on items that can improve in actions that may not be decided by the compiler. Objects listed as volatile are excluded from optimization as their rates can be modified by cryptogram outside the range of prevailing code at every time. A volatile keyword is utilized to change the rate of a variable by diverse threads. It is additionally used to create classes thread-safe. It signifies that many threads may utilize a process and situation of the groups at the identical time sans any difficulty. The volatile keyword may be utilized each with fundamental types or items.

The volatile keyword produces no reserve in the rate of the variable and constantly reads the variable from the principal consciousness. The volatile keyword may not be utilized with groups or programs. Nevertheless, it is managed with variables. It also ensures visibility and systemization. It stops the compiler of the reordering of the cryptogram.

K-map or the Karnaugh map is a method of simplifying Boolean algebra expressions given by Maurice Karnaugh in 1953.

JFET stands for the junction-gate field-effect transistor. It is one of the simplest types of a field-effect transistor in which the gate is created by the reverse-biased junction. Basically, JFETs are three-terminal semiconductor devices that can be used as electronically-controlled switches or resistors or to build amplifiers.

8086 registers deal with selecting segments of main memory and are used to enhance the speed of execution of the computer system so that the processor is able to fetch and execute the data from the memory easily and fast.

17) What Is Loop Unrolling?

Loop unrolling is a compiler optimization that reduces the frequency of branches and loop maintenance instructions. It enables other optimizations and increases the parallelism degree in the loop body given the increase of its operations. It is easily applied to sequential array processing loops where the number of iterations is known prior to the execution of the loop.