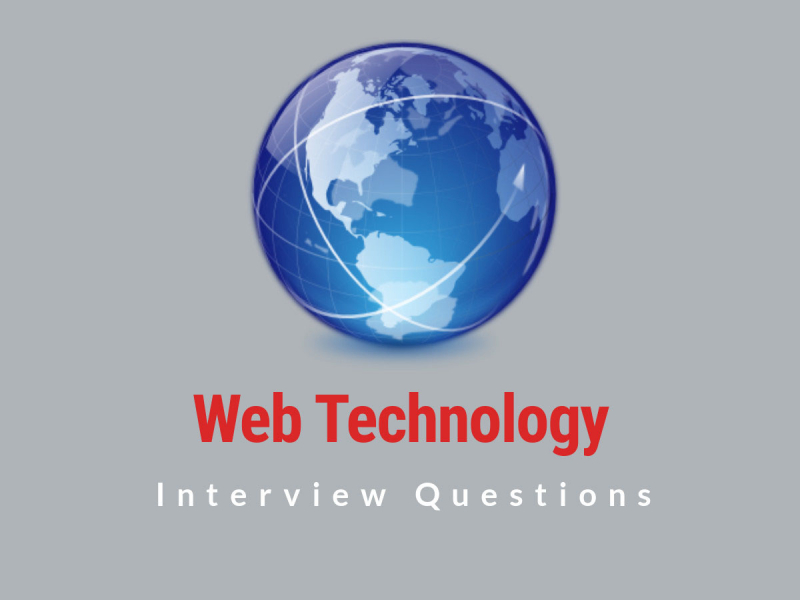 What is Web Technology?

We know that computers can’t communicate with each other's as humans do. Instead, they need a large code to process information in order to provide you with significant knowledge. Concluding this, we can say that the process by which computers communicate with each other using the languages of markup and multimedia packages known as Web Technology.

In general, web technology is meant to create and run various dynamic websites on the browser. It includes various languages which are combined with each other to do very specific works on the internet. It includes the browser languages such as HTML, CSS, etc. which are used to maintain the lookup of any websites, server languages such as PHP, java to maintain the servers and uses application layer protocols such as HTTP, FTP, SMTP, etc. If you want to know the languages used in web technology in full detail, then read the full article.

Hypertext Markup Language (HTML) is the markup language designed for creating and developing web pages. It is also used for displaying other information such as images in web browsers. To write HTML, an element term is defined which consists of tags that are enclosed in an angular bracket like, within the web page content. Mostly, HTML tags come in pairs like and but also some tags come in empty elements and so are unpaired, for example For the paired tags, the first tag in a pair is known as the start tag, and the second tag is known as the end tag (they are also called opening tags and closing tags). web designers can add text, further tags, comments and other types of text-based content between these tags. The HTML documents are then read by web browsers that compose them into visible or audible web pages. The browser uses these tags to understand the content of a web page but it does not display these tags as it is. If you want to learn HTML, you can check on w3schools which is an open source for web developing languages. Also, it is easy to learn and implement to design creative and complex websites. In short, it acts as a glue which holds together each website.

Role of HTML in web designing:

CSS or Cascading Style Sheets is a style sheet language designed for “how the document which is written in markup language should display on browsers”. Very often, CSS is used to set the visual styles of web pages but it can also be applied to any XML document.

CSS is designed to enable the document presentation by including aspects such as layout, colors, and fonts by isolating the content from display. This separation improves the availability of content which means the file can be downloaded in half of the time by using CSS. By specifying the relevant CSS in a separate .css file, this helps to enable multiple HTML pages to share format which reduces complexity and redundancy in the structural content. It can also display different web pages that depends on what is the size of a window screen or viewing device.

XML means Extensible Markup Language is a descriptive markup language mainly used to enhance the functionality of HTML. In short, XML is like a complement to HTML. XML allows you to define your own tags, their ordering and how they will display on an application. XML is not only a language, but instead, it also defines as a meta-language. It means it is a language which allows developers to create or define other languages.

XML is also a building block of AJAX the request handling language or a technology that allows applications to update specific data without reloading an entire page. It is used to make your web applications more powerful, more versatile and more usable.

Role of XML in web development:

In the back end, PHP is used. Having the title of “server scripting language”, PHP one of the popular languages who is controlling the big segment of the “server-side website development industry” these days. In short, PHP is the server-side scripting language that runs on a server side to design the dynamic applications. PHP has held this distinction for many years. Like HTML, CSS, it is easy to learn and to implement in contrast with other high-level languages. Unlike some other computer languages whose influence has wearied with the passage of time, but PHP has always grown.

As of 2018, Nearly 11 million developers are using and working on PHP which proves that PHP is the most popular and demanding language for backend connectivity applications.

Role of PHP in Web development:

As we seen, PHP is widely used in every corner of the world by the developers. PHP is not only confined in software's but is also widely used in designing hardware controlling software components. Following are some other usage of PHP: -

My SQL is the most popular and efficient database server by this time. In addition to this, it is efficient in conjunction with PHP scripts. By this, it is possible to build dynamic and powerful server-side applications. For many small and enterprise company, RDBMS is being used. My SQL is easy to use and powerful in performance. MySQL AB is a Swedish company that supports, develop and market MySQL. MySQL gradually so famous due to these following reasons-

JavaScript is a programming language which is dynamic, high-level, interpreted and un-typed. JavaScript is regulated in the European Computer Manufacturers Association (ECMA) Script language designation. Most of the modern website utilize it. JavaScript is also accepted by most of today's browser. The popularity of the JavaScript for server-side application is increased day by day. The main reason for this is the presence of fresh and faster JavaScript Virtual Machines (VMs) and platforms.If we look by the side of the client, this language is accepted as an interpreted language, on the other hand, most of today's browser do the just-in-time assemblage. The users who visit your page can also the replica of your work because the script is written on the HTML page. Many of the great programmer and users find it helpful this openness a good advantage because it is possible to use or study the JavaScript that is you are viewing whatever you find on the website.

jQuery is developed to simplify the client-side scripting of HTML which is a cross-platform JavaScript. It is the absolutely free and open-source library but just required a Massachusetts Institute of Technology (MIT) license. The analysis shows that jQuery is the

It is designed to facilitate to operate DOM elements, documents, creating animations, develop Ajax applications and handling of events. It also helps the developers by allowing them to create plug-ins on top of the JavaScript library. The modular make it easier to create the web application and web pages.

AJAX stands for Asynchronous JavaScript and XML is not a programming language but a concept that runs in a parallel way. It becomes famous in the year of 2005 after the Google search engine's auto-suggestion box. Basically, it is a client-side script which communicates with a server without refreshing page again and again. It is known as the method of exchanging the information between the server and the parts of the webpage that needs to be updated but without reinstalling the entire page.

Role of AJAX in Web Development: