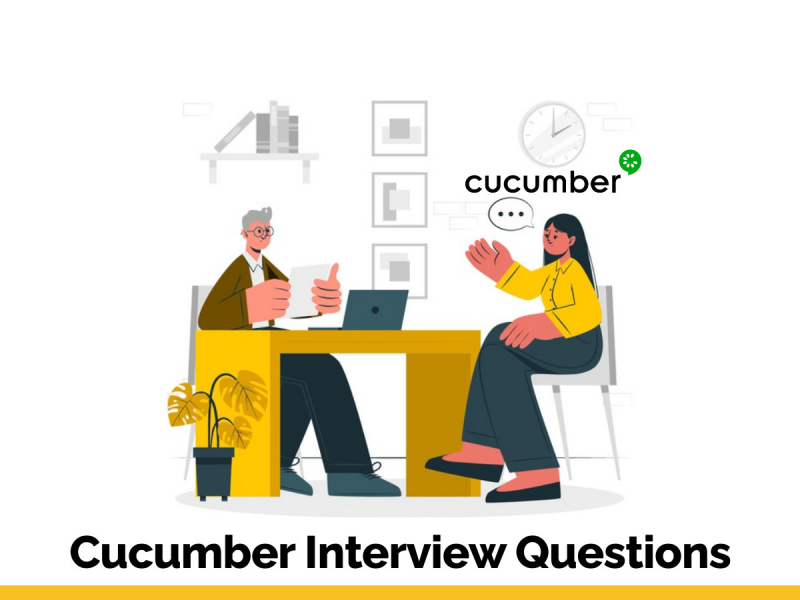 The Cucumber is a software tool that supports Behaviour Driven Development (BDD). It gives the benefit of writing tests that can be easily understood by anyone even if the particular person hasn’t had any technical knowledge. This software uses a Ruby programming language. It is very useful for business stakeholders who can’t easily read code. Its main focus is on end-user experience.

Below are the list of Best Cucumber Interview Questions and Answers

A cucumber is a software tool that supports Behaviour Driven Development (BDD). It gives the benefit of writing tests that can be easily understood by anyone even if the particular person hasn’t had any technical knowledge. This software uses a Ruby programming language. It is very useful in business stakeholders who can’t easily read code. Its main focus is on end-user experience.

2) What is profile in cucumber?

The profiles in cucumber allow an easy way of defining groups of tests in a feature file in order to choose to only run a select group instead of running every command when we test a particular feature. It is introduced to save time and prevent carpel tunnel syndrome. The user can reuse commonly used cucumber flags in a cucumber.yml file.

3) Enlist some features of cucumber?

Some features of cucumber:

4) What is the use of cucumber.yml file?

Cucumber.yml file allows you to store the command line options so as to save you from the tedious job of typing commands over and over again. The cucumber.yml file must be placed either in your project’s root directory or underneath a directory called config.

5) How you generate the report in cucumber?

Cucumber is a BDD framework and it doesn’t have a reporting mechanism. However, cucumber has provided a nice feature to generate reports. These reports are basic reports but by using the output of these reports you can build more detailed HTML reports.

These reports are pretty reports, Monochrome reporting, usage reports. Cucumber gives the capability to generate reports in the form of HTML, XML, JSON, and TXT.

6) What is scenario outline in cucumber?

The scenario outline is used to replace variable/keywords with the value from the table. By using this software to write commands sometimes repetitive commands or scenarios with different permutations of inputs/outputs can be really time taking and frustrating as well. To solve this cucumber came with a solution to introduce the concept of a Scenario outline.

The symbol | is used for parametrized in cucumber. This symbol is used to specify one or more parameter values in a feature file.

8) What language is used by cucumber?

9) What are tags in cucumber?

Tags are used in particular scenarios to associate tests like smoke, regression, etc. @ symbol is used to represent tag in cucumber. Tags are also used to manage the execution of large files by using a tag with scenarios inside the feature file.

10) What is a feature file in cucumber?

It is an initial stage of the cucumber tests. This is a file where the user can describe tests in descriptive language. Feature file in cucumber can have one scenario as well as many scenarios in a single feature file. It basically describes the steps and expected outcomes for a particular case.

11) What are helper methods in cucumber?

12) What are hooks in cucumber?

Hooks in cucumber has a special function of performing the task. It is an unseen step that allows us to perform our scenarios or tests. It is developed to reduce code redundancy and to give us a better workflow of codes. We can also use hooks after and before to be executed with a specific tag only.

13) What are annotation in cucumber?

Annotation in Cucumber has a special function. It is a predefined text which has a special meaning in this software. It informs the compiler or interpreter to know what should be done at the time of execution.

14) What is Arity mismatch in cucumber?

Arity mismatch in cucumber states that the steps don’t provide the right number of arguments which is needed for the step definition.

There are two types of hooks in cucumber that we use;

16) How to run cucumber tests in parallel?

Cucumber is software for Behaviour Driven Development (BDD) and when you start using it for your work, the number of automated tests can add up hence increasing your work by having to wait for it to run them all together. This is time-consuming and sometimes even takes a lot of time. To save time and increasing speed cucumber developed continuous integration (CI) which allows you to use CI parallelization. Jenkins allows you to configure pipeline stages to define tasks that will later be executed in parallel.

Dry-run is used to compile feature files and step definitions in cucumber. It is specially used in the stage when you will have to see if there are any compilation errors, to check that you can use dry-run. Dry-run options can either set as true or false. If it is set to true, it will mean that Cucumber checks every Step mentioned in the Feature File have corresponding code written in Step Definition file or not. So, if in any case any of the functions are missed in the Step Definition for any Step in Feature File, it will give us the message.