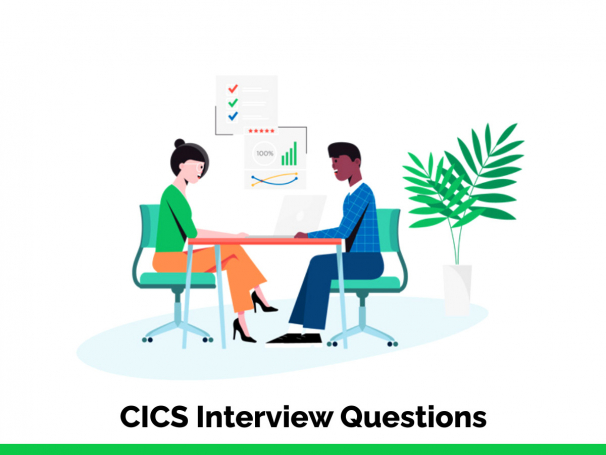 CICS stands for Customer Information Control System. This type of control system is a mixed language application that helps to provide the online transaction of management of the IBM mainframe systems which is mainly under the OS software and the VSE. CICS is basically the type of middleware-designed application or software that is mainly designed to support rapid, high-level online transaction processes. This was initially released on the year July 8, 1969. CICS provides the services of replacing or extending operating systems. There are lots of CICS Interview Questions and answers that will really help you a lot.

CICS is written in many different varieties of programming languages. CICS is also used in the supplied languages to mainly interact with the resources that include the files, database connections, or terminals. CICS also controls all the transactions such as if in any case the transaction just fails then all the recoverable changes can be also backed out. The CICS also have the highest profiles because they are used in banks and insurance companies. So the following are some of the CICS Interview Questions and answers that you can follow.

Below are the list of Best CICS Interview Questions and Answers

First of all, CICS stands for the Customer Information Control System. This type of system controls all the online transactions of the management of IBM. A CICS is a type of processing that is mainly initiated by the use of the single request that can also affect the one or more of the objects. The CICS was being founded in the year 1969.

The following are some of the main uses of PPT in CICS and they are:

4) What are the types of important programs that are used in the CICS?

The following are some of the important programs that are used in the CICS:

TCP basically stands for the Terminal Control Program. TCP is used to receive all the messages from the terminals and also used to request the CISC to initiate or start the task.

Firstly, KCP stands for the Task Control program. KCP generally is used to control all the execution task and their related properties. Apart from this, it also helps to handle all the issues that are mainly related to multitasking.

The PCP stands for the Program Control Program. PCP is mainly used for locating and load the program for the execution. The main working of the PCP is it just transfer the control between the programs and in the end, it returns the control back to CICS.

8) What are the main uses of the transaction in the CICS?

The following are some of the main uses of the transaction in the CICS:

FCT stands for the File Control Table. All the types of the VSAM files used in the CICS programs have to be registered in the file control table. FCP is a type of program that mainly refers to the FCT. The FCT has ACCMETH or the data access method, DATASET or the Dataset name, File ( file name), SERVEQ or the operation needs to be performed on, FILESTAT or the file initial status, BUFND or the number of the data numbers and BUFNI or the numbers of index buffers.

BMS stands for the Basic Mapping Support. BMS is being provided by the CICS. The BMS will always help to define and format the screen. When you are going to define a screen by using the BMS then the screen is called the MAP. The collections of all the screen are called as the Mapset.

11) What are the types of processes to create a MAP in CICS?

The following are the types of 3 processes in which the MAP in CICS is being created :

12) What are the types of the DFHMDF present in the CICS?

The following are some of the types of the DFHMDF present in the CICS set:

13) What are the classifications of the CICS program?

The following are some of the classifications of the CICS:

14) What is Non-Conventional Programs?

15) What is the term conversational programs means?

A conversational program is mainly used to send a message to the terminals and receiving a response from the active users. The online application always uses the conversation between the users and the application program by the use of the send and receive command.

What are the pros and the Cons of CICS?

The following are some of the Pros of the CICS:

What are the features of the CICS?

The following are some of the features of the CICS: