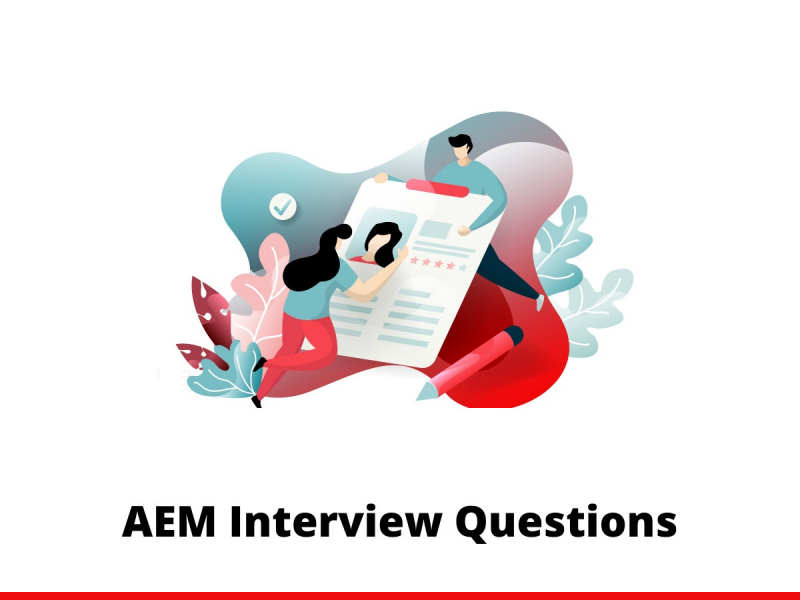 Below are the list of Best AEM Interview Questions and Answers

The full form of AEM is Adobe Experience Manager. It is a comprehensive content management solution for building websites, mobile apps, and forms. AEM makes it easy to manage your marketing content and assets. Adobe Experience Manager (AEM) is based on the concepts of Apache Sling, a Java application based on OSGi using the Apache Felix engine. In layman's terms, you could mention Apache Felix is to Apache Sling what Equinox is to Eclipse IDE. is part of the Adobe Marketing Cloud. It is also a part of the Adobe Marketing Cloud.

AEM provides a testing framework named Bobcat for automating tests for your AEM UI. You can write and run UI tests directly in a web browser by using this framework that provides a Javascript API for creating tests. It also uses Hobbes.js, a testing library written in Javascript. The Hobbes.js framework was developed for testing AEM as a part of the development process which is now available for public use for testing your AEM applications. It is an open-source test automation framework for the functional testing of web applications.

3) What is AEM Explorer?

Sometimes, Application Explorer Missions is abbreviated as AEM Explorer which is designed for readers with low vision, physical challenges, and learning and attentional difficulties who may benefit from enlarged, spoken, highlighted, or re-formatted text. It does not address Braille use, and the Explorer assumes that the guide using the application has a vision.

The technology stack used in AEM are listed below:

Some Advantages of AEM are as follows.

A Template is used to create a Page. It also defines which components(reusable modules) can be used within the selected scope. It is a hierarchy of nodes that has the same structure as the page to be created. It does not include any actual content.

7) What is workflow in AEM?

In AEM, the workflow allows users to automate the activities in the CMS instance. A workflow is a well-defined series of steps that consists of various steps, including participants, process, and some tools. it can either be sequential or parallel when multiple procedures can run parallel to each other.

8) What is a Component in AEM?

Components are reusable modules in AEM that implement specific application logic to render the content of our website. A component usually contains a JSP or HTML file. HTML files contain the HTML markup and some business logic for the component. A typical AEM page is composed of many components. In other words, we can say that Components are the building blocks of AEM pages.

The AEM connector fetches several types of documents such as Page objects and Asset objects. Connector fetches access control lists (ACLs) for document-level security. It is Search engine independent. The connector runs from any machine with access to the given AEM server that supports optional content fetching. It provides Connection throttling.

The full form of OSGi is the Open Service Gateway Initiative. It is also a Java framework that is used for developing and deploying modular software programs and libraries.

The OSGi Life-Cycle layer adds bundles that can be dynamically installed, started, stopped, updated, and uninstalled. Life cycle operations are fully protected with the security architecture.

You can say that the OSGi Life-cycle includes the following steps:

INSTALLED - The bundle has been installed into the OSGi container, but some of the bundle's dependencies have not yet been met. The bundle requires packages that have not been exported by any currently installed bundle.

STARTING - A temporary state that the bundle goes through while the bundle is starting, after all, dependencies have been resolved. The BundleActivator.start method will be called and this method has not yet returned.

ACTIVE - The bundle is running. Disabled while Spring is doing its stuff. Spring scans the Spring configuration and builds the context, then hands the context to the plugin. The plugin needs the context in order to create instances of each plugin module.

UNINSTALLED - The bundle has been removed from the OSGi container.

12) What is dispatcher in AEM?

The dispatcher is the AEM (Adobe Experience Manager's) caching and load balancing tool. It also helps to protect your AEM server from attack.

13) What is AEM Brackets Extension?

The AEM Brackets Extension provides a smooth workflow to edit AEM components and client libraries and leverages the power of the Brackets code editor, which gives access from within the code editor to Photoshop files and layers. The easy synchronization provided by the extension (no Maven or File Vault required) increases developer efficiency and also helps front-end developers with limited AEM knowledge to participate in projects. This extension also provides some support for the HTML Template Language (HTL), which takes away the complexity of JSP to make component development easier and more secure.

14) What do you understand by extending a component?

Extending components means add complexity and verbosity to your code, and in some cases, additional performance overhead.

The full form of VLT is the Jackrabbit FileVault tool. It is a tool developed by The Apache Foundation that maps the content of a Jackrabbit/AEM instance to your file system. It has similar functions as a source control system client such as a Subversion (SVN) client. It provides normal check-in, check-out, and management operations, as well as configuration options for flexible representation of the project content.

AEM 6.5 release is customer focussed, it conveys development that empowers marketers and IT experts to work together on the quick conveyance of customized brand experience.

Test Sightly Component is Lightweight, Fast, Secure, Code-less, and Powerful. It has a Straightforward API for logic, allowing it to do virtually anything. It also has a simple & restricted feature set.

20) What is use of Activator.java file?

Activator.java is a package in java that facilitates remote object activation.

21) What is reverse replication?

Reverse Replication provided with Replica Virtual Machine which is a manual failback option. Hyper-V Replica is a disaster recovery solution but not a high availability solution. Reverse replication uses an agent in the publish environment which references the author's environment.

Adaptive forms provide an optimized and simplified form-filling experience for end-users with dynamic scripting capabilities that allows you to write expressions to add various behaviors such as dynamic show/hide fields and panels. It also allows you to add calculated fields, make fields read-only, add validation logic, and many more. The dynamic behavior is based on user input or prefilled data.

23) What are the basic SCR Annotations used for creating an OSGI component?

The Basic SCR Annotation used for developing a component or service in OSGi is listed and explained below:

@Service indicates the service interface that is provided by the component.

@Property indicates a property that can be used in the class.

@Reference injects a service into the component.

@Component defines the class as a component.

The different interfaces available in CRX are:

25) What is Adobe Marketing Cloud?

26) Explain what is the design dialog?

A dialog box is a common type of window that looks like a pop-up box in the GUI of an operating system. It displays information and accepts input from the user.

27) What is the use of clientlibs?

Client libraries or clientlibs in AEM is one of the most widely used features provided by Adobe that allows us to manage our client-side resources like ( JavaScript, CSS, images, fonts, etc ). It also provides options to debug, minify, merge, and gzip the client-side code.

The paragraph system (parsys) is a compound component that allows authors to add components of different types to a page and contains all other paragraph components. On the other side, iparsys is a parsys that inherits its content from the ancestor pages.

30) What is workflow console in AEM?

The Workflow console is defined as the centralized location for workflow management in AEM that is accessed via the Workflows link on the AEM Welcome page and the Tools section of the touch-optimized UI(user interface).

31) What is use of DAM Renditions?