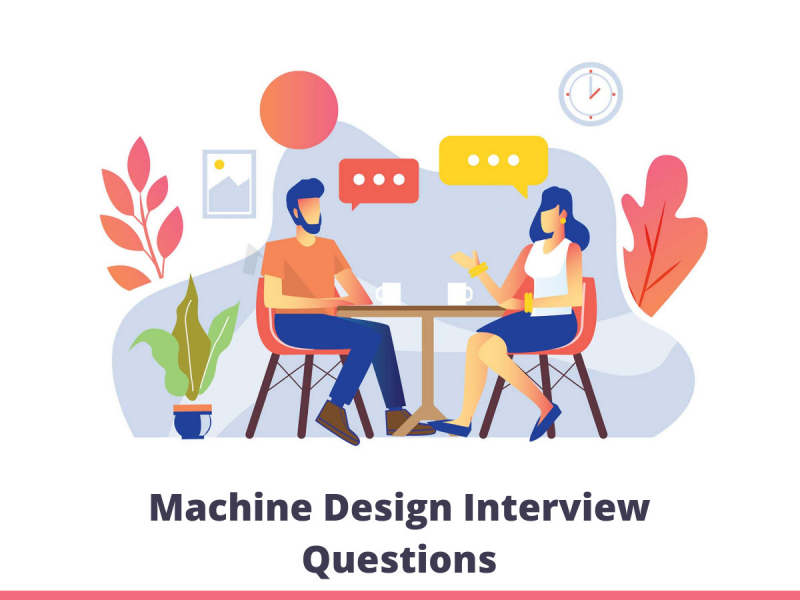 It is a point at which the line if produced will meet or intersect a plane respectively.

In case when the line is parallel to both the horizontal plane and the vertical plane then there will be no trace on the planes.

2) What is Stress-Strain Curve?

Before defining the Stress-Strain Curve, you must first understand what is stress and strain. Stress is defined as the ratio of the force divided by the cross-sectional area of the material to which the load is implemented. A Strain refers to the measure of the deformation of the material because of the applied force.

Now, the Stress-Strain curve is the graphical representation of the behavior of a material when the force is applied. In short, it is the curve that is produced by plotting stress and strain values under different loads. The fig is shown below: 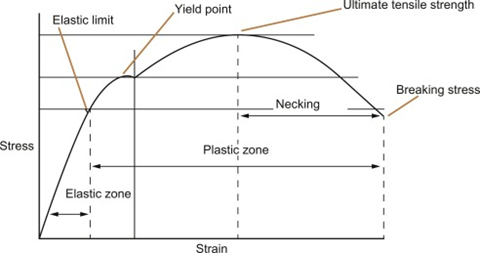 3) What Is Endurance Limit?

It is the uppermost limit under which an endless number of loading cycles can be implemented to a material without causing the wear out. The endurance limit is also referred to as the Fatigue limit. In other words, endurance strength is determined as the maximum value of completely reversed bending stress that a material can endure without tire out after a number of cycles.

4) What is an adaptive design?

Adaptive design is one of the types of machine design which is extensively used. This is a process of modifying the existing technology into a better design. It uses the basic features and optimizes or retouches them so that the desired product gets better and can fit better to work with it. It is really hard and takes a lot of time to make a design from scratch. So, it not only saves money but also saves a lot of time.

Snap head rivets are two-piece rivets that are used to join two or more materials.

Below are some uses of Snap head rivets:

6) What steps you follow as a designer while designing a Machine?

There are no specific rules for machine designing but it is not also a random process. Below are the important steps that are followed by the Engineer or Designer. Let’s have a look:

7) What is machine design?

Machine design is referred to creating a machine or structure by using imagination, scientific principles and engineering techniques. A machine is designed in such a way that it satisfies the needs of a customer. It tells the basic idea How a machine will look and perform the function. Machine design focuses on three main areas i.e. mechanical behavior, machine element and manufacturing process.

Ductility is defined as the capacity of a material to be deformed plastically without fracture. This property indicates the softness and malleability of the material. It basically depends on the nature of the material.

Impact load is defined as the force delivered by the sudden load on a structural member rather than a force applied constantly and sustained over a long period.

Throwing a bundle of wood from the 20th floor on the ground instead of simply placing it. The formula to calculate the impact load is the total kinetic energy dissipation divided by local deformation.

The various phases of a design process are as follows:

11) What are engineering tolerance?

In mechanical engineering, tolerance is the limit of how far a true measurement can change from what's planned. It is done to achieve proper functionality and to ensure that the final product is worth using. It is difficult to create tolerance and it is only measured by the experts.

There are two major tolerances:

12) What is Engineering Drawing?

Engineering drawing is used to accurately catch all geometric features of an item. It helps the manufacturer or engineer to produce the desired product. Engineering drawing is not merely drawing of pictures but it is a graphical language used to transmit information from engineers to the worker.

Engineer drawing is very useful in defining the size, the shape of the product or its component. Engineer drawing also puts a light on information about acceptable variations, materials, load limits, and any other valuable information that define the property of the material.

There are many types of screws that are used for several purposes. Some of them are mentioned below:

14) What are the types of fracture?

Under the action of stress, the object or material is separated into two or more pieces, this process is known as Fracture. Within the solid, because of the development of certain displacement discontinuity surfaces fracture occurs.

Curved beam, as clear from the name itself, includes any structural member like arches, chain links, etc. which must have a significant amount of curvature in the plane of loading. In short, we can say that a Curve beam is a beam that is covered by circular arcs in every direction.

The curved beam can be further divided into two parts:

GD&T stands for Geometric Dimensioning and tolerancing which work as a system to define the relation between part features and measurement references. Engineers and designers make use of this international language to describe the part features. They describe the part characteristics by virtue of size, orientation, form, and location. It gives information about the degree of accuracy of each feature of the part. Moreover, it also defines the possible variation that can be made in the form and features.

18) What is injection moulding?

Injection moulding is a process to get the product in the desired shape. This process is done by adding molten material into a mould. A number of materials used for this for e.g. metals, glasses, most commonly thermoplastic and thermosetting polymers, confection, and elastomers.

After the material is added to the mould, it is allowed to cool and hardens. An engineer or industrial designer then gives design to the product in a desirable way. Industrial moulding is done to make a number of products with complicated shapes.

This process has the following 6 major steps: -

19) What are ordinate dimensions?

It is used as a reference on a part if the reference doesn't exist already. In the absence of an appropriate planar surface, it is possible to sketch or place a feature on a datum plane. If it were an edge you can dimension to a datum place. You can also utilize a datum plane while constructing an assembly.

Although the size of the Datum plane is infinite, it is really easy to resize them to fit part, feature, axis, surface, edge or the measurement of the display outline of the datum plane