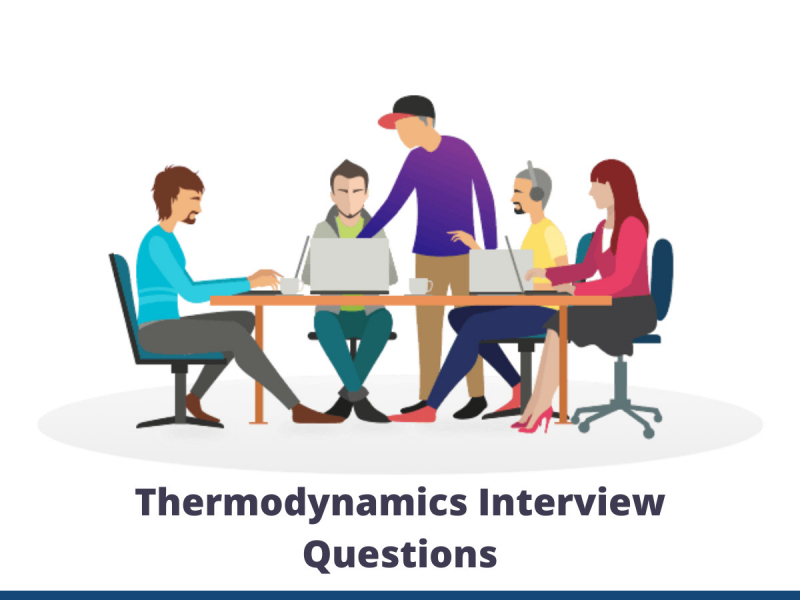 Below are the list of Best Thermodynamics Interview Questions and Answers

1) Explain what is Thermodynamics?

Thermodynamics is the branch of physics that studies the relationship between heat, work, energy and temperature. It provides information about the flow of energy and how thermal energy (energy of a substance or system because of its temperature) converts to and from other forms of energy.

2) What are laws of thermodynamics?

The laws of thermodynamics put a light on how the energy of the system is changing and whether the system is performing any work on its surroundings.

First Law: This law is also known as the Law of conservation of energy. It states that energy can neither be created nor destroyed but can be transformed or converted from one form to another. It says that the energy of a system is equal to the addition of an increase in thermal energy and work done on the system.

The Third Law: It states that the entropy of a system approach at zero when the temperature is zero. A perfect crystal which has only one state and minimum energy has zero entropy at absolute zero.

3) What is Zeroth Law of Thermodynamics?

4) What is Carnot engine?

Carnot engine is a theoretical cycle given by Nicolas Leonard Sadi Carnot in 1824. He stated that in this engine a hot body is needed that transfers the energy to a cold body which ultimately produces mechanical work. You can see this engine in your refrigerator and air conditioners.

There are 3 types of Thermodynamic System:

6) What are the Advantages of Electronic Ignition System?

The ignition system is used to ignite the mixture of air and fuel in the combustion engine. This system has several advantages and it is better than mechanically timed ignition systems.

7) What is Roots Blower?

A roots blower is a type of compressor that contains two rotors with a pair of lobes which rotates in an airtight casing. When these rotors rotate, it compresses the air present at atmospheric pressure and traps the air in a pocket. The lobes which are in rotary motion deliver this compressed air to the receiver. Subsequently, more and more air is delivered to the receiver which results in a high pressure in the receiver and then used at required pressure. These are mostly used as Vacuum Pumps in the industry.

8) What is Steam-Turbine and Steam Engine?

Steam turbine: Steam turbine was invented by Charles Parsons in 1884. It is a device that uses the thermal energy (extracted from pressurized steam) to operate the work on a rotating output shaft.

Steam Engine: A steam engine is a device that uses the steam as its working fluid to do mechanical work. This steam works to push a piston back and forth inside a cylinder. And this pushing force is further converted into rotational force with the help of connecting rod and flywheel.

9) What is entropic Exponent?

Entropic exponent states about the exponential curve in entropy.

10) What is compression ratio for Diesel engines?

Compression ratio for Diesel engines lies between 14:1 to 25:1.

Hess law or Hess’s law of constant heat summation states that if any reaction has taken place in several steps, then the standard enthalpy reaction is equal to the sum of all intermediate reactions at the same temperature. It tells that Enthalpy change for a reaction is not dependent on the way a product is obtained if initial and final conditions both are the same. This law shows that Enthalpy is a state function.

Enthalpy is a thermodynamic quantity which represents the total heat content of a system. It is defined as the addition of the internal energy and the product of the (pressure and volume) of a thermodynamic system. It is a state function and its value depends upon pressure, composition and temperature of the system.

Where H represents the enthalpy

Torque is the amount of force to make an object rotate about an axis. Torque makes an object to acquire angular acceleration. As Torque is a vector quantity, its direction depends on the direction of a force.

In thermodynamics, the Closed system is a physical system that does not allow the transfer of matter throughout the boundary between system and surrounding. It only allows the energy to pass through this boundary. Example of a closed system is an air compressor.

16) Which law is used for exergy balance in Thermodynamics?

Both First law and Second law is used for exergy balance in Thermodynamics.

17) What is quasi-static process?

A Quasi-static process is a process that occurs infinitesimal slowly that every step in the system tends to remain in equilibrium. It is a reversible process. The quasi-Static process permits all adiabatic and isothermal processes to proceed very slowly.

18) What is a steady flow process?

In this process, fluid properties can change from one point to another at control volume. During this whole process, the fluid properties will remain constant at any fixed point. This process allows the transfer of matter and energy through the open system steadily. Steady flow has some characteristics that are given below: -

The S.I unit of energy is “Joule”.