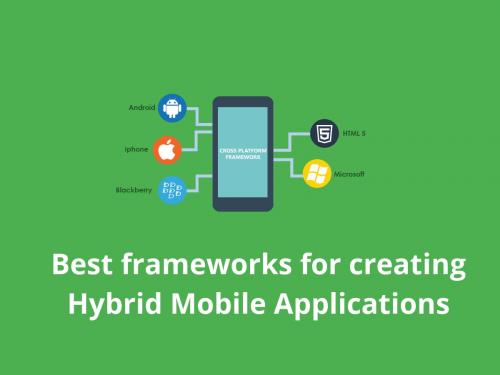 The days when the mobile application development process was labeled as a tedious and effort-taking task are now gone. It was because the frameworks available then were ordinary with limitations. Now, it is the century of cross-platform frameworks, where the tedious process of building mobile Apps has become simple and easy. The frameworks now have the contemporary App code that supports the concept of Write Once Run Anywhere, the WORA concept. It enables the developers to write the code once and run it on various platforms. The code is also re-used to build a new and efficient App that runs on different platforms like Android, iOS, windows and many others So, are you looking for a cross-platform framework to build a mobile application? If yes, then read on. Here we present to you the list of 8 Mobile App creating cross-platform frameworks that help you build different applications like gaming, progressive or native and many other. And, also to help you with finding out which one suits the best for you. So, take a glance at the spoiler alerts below the description of each framework.

With Xamarin, the developers have access to use the same APIs, IDE, and language anywhere they want. And, also by using the C# code base, the developers can create a native App for different platforms. Building Apps with Xamarin enables the same application experience as in the respective platforms. Also, creating an App with Xamarin takes less time and is ultimately cost-effective. The Microsoft Visual Studio makes Xamarin different from any other framework, as the developers can make the most out of its advanced features like IntelliSense, debugging of apps, and Code completion. Most tech giants in the industry have already endorsed Xamarin cross-platform like Microsoft, Dow Jones, foursquare, and IBM.

What makes it a spoiler - The free version of tt his framework offers limited features and due to compatibility issues, it doesn't allow the developer to use open-source libraries.

If gaming is the motive of your App, then Corona SDK is the perfect framework for you; it allows the designing of free gaming Apps on various platforms. When it comes to mobile and game development, the Corona framework performs 10 times faster, and this is possible because of the backend framework of Corona that depends on Lua totally, which is a lightweight, multi-paradigm programming language. This framework is free and is compatible with both Windows and Mac operating systems.

What makes it a spoiler - It is a closed source. It supports only Android and iOS and requires an internet connection to build applications.

Previously known as Apache Cordova, the PhoneGap is owned and open-sourced by Adobe. This is one of the most preferred frameworks for designing cross-platform mobile Apps. This is a simple framework, where the developers simply translate from HTML5, JavaScript, and CSS. It also lets you share your App with a team or friends to get a second opinion or review about it, which will lead to enhancement and further improvements, making the App much better. This framework has a cloud solution that builds the application directly. A notable feature of this framework is that the developer can instantly see the changes on the connected mobile device, while they enter the command on a desktop. Few more features like a booming community, plugin library, and third-party tools make this framework an ideal choice.

What makes it a spoiler - The only drawback of this framework is that it is not suitable for graphics-intensive applications.

What makes it a spoiler - The performance may not be swift. And, building the navigation within the App is complex.

This framework is also again a free and open source cross-platform framework that uses C# .NET and the Mono framework. It is mainly used to develop the mobile App for Cross-platform mobility. MonoCross is released under the MIT license and is available to download, share and contribute to the framework for free. The framework outputs the hybrid App support for Web OS via HTML 5.0, CSS, Android, JavaScript, BlackBerry, and Symbian. The foundation of this mobile framework is an abstract mobile application where all the business logic is developed.

What makes it a spoiler - The support and the documentation for MonoCross frameworks are limited on the internet; so, the developers may have to find a way out themselves in tricky situations because of a lack of learning resources.

Sencha Touch mobile application development framework is the world's first mobile application development framework that is built specifically to control CSS3, HTML5, and JavaScript for a high level of flexibility, power, and optimization. With this framework, it is possible to access native APIS to utilize specific features and enhance the experience of the native device. This framework has eight built-in transition effects that include slide-overs or under the current element, flip, pop, and cube. It supports common touch gestures like tap, swipe, double tap, scroll, or pinch.

What makes it a spoiler - The themes with a native look are limited and the commercial licensing feature is difficult to comprehend.

React Native is most commonly used to build native applications and is much talked about in the developer's community. This framework renders native applications for both Android and iOS mobiles. To the long list of supported platforms by this framework, the Android TV is the new addition. With this framework, you don't just develop a mobile web App; you develop a real mobile App, which is indistinguishable from any other App built using Objective-C, Swift, or Java. This framework uses the same fundamental UI building blocks as the regular Android and iOS.

What makes it a spoiler – The documentation is poor and third-party components are limited.

This cross-platform framework helps in developing industry-based applications, as it supports rapid application development. The code can be written in Java and the application is tested and verified with Codename One's test automation tools and simulator devices. Codename One framework supports the prominent Integrated Development Environments like Eclipse, NetBeans, and IntelliJ IDEA. The developer can build the native iOS Apps and also the native Windows Apps without any Mac machine or PC; this makes it the most interesting feature of its build server. This framework is highly recommended in developing iOS applications.

What makes it a spoiler - The codename's major flaw is that all the event handlers are stored together in a single file making the development part more cumbersome. And, also the framework's graphics UI doesn't meet the requirements of large projects and upon all of it, the visual themes are not updated.

Word to the Wise