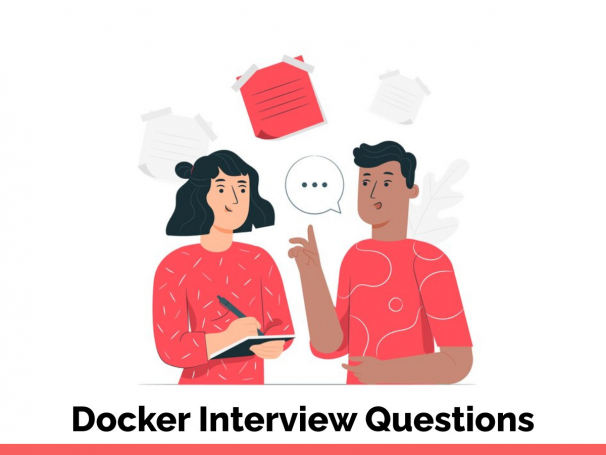 Docker is basically a computer program that mainly performs operating-system-level virtualization. This type of computer program was released in the year 2013. Docker is mainly used to run a computer package named container. Containers allow the developer to pack up all the applications with the parts it needs the most. The package parts are libraries and the other dependencies.

The use of Docker by the developers is increasing day by day. Docker has the potential for the organization by giving the developers and IT the freedom to build, manage and secure business applications. In the context above, we have presented the most important frequently asked Docker Interview Questions that will help you a lot.

Below are the list of Best Docker Interview Questions and Answers

1) What do you understand by Docker?

2) What are the difference between Docker and Virtual Machine?

The following are the main differences between the Docker and the Virtual machine:

3) What is Docker container?

4) What are the main components of the Docker?

The following are the main components of the Docker:

5) What is Docker image?

A docker image is a file that is comprised of multiple layers. It is used to execute code in the Docker container. An image is a combination of a file system and parameters. When dockers run the image, it becomes one or many instances of the container. Docker image is the package of executable files. It contains different code, libraries, runtime, binaries, and configuration files that are necessary to run the application.

A Docker Hub is the type of hosted registry solution that is being provided by Docker Inc. The Docker Hub allows you to link to code repositories, link to Docker clouds, stores manually pushed images and builds your image and tests them. Docker Hub will help you to provide these types of things so that you can easily set up the image to your hosts.

7) What is Docker cloud?

Docker cloud is a type of service that is being provided by the Docker. In the Docker clouds you can just carry out the following operations:

8) What is Docker swarm?

Docker swarm is a type of tool that is used for the clustering and arranging of the Docker containers. With the use of the Docker swarm, the administrator or the developer can establish and maintains the cluster of docker nodes. Docker Swarm also handles the standard Docker API.

9) How do you explain Dockerfile?

A Dockerfile is a type of text document that contains the commands. A user could call on the command line to arrange an image. Dockerfile will give you the capabilities to create your own image.

10) How can you use the Dockerfiles?

11) How can you create the Docker container?

The followings are the commands that are available in the Dockerfile:

If you want to create the Docker container, then you have to use a command and that is:

12) What are the commands that are available in the Dockerfile?

The followings are the commands that are available in the Dockerfile:

13) What are the platforms on which the Docker runs?

Docker mainly runs on the Linux and cloud platform.

In Linux there are also different types available on which Docker runs and they are:

The following are the types of clouds on which Docker runs:

14) If you are using the Docker container can you loose any data?

16) How to stop all containers in docker?

Below is one line command to stop all containers in docker.

Some Pros of Docker

As you all know that nowadays all the developers most commonly use Docker. Docker for Mac or Docker for Windows lowers the complication of leveraging Docker on the non-Linux environment. The installation process of the Docker is also very easy. You have to install it in the same old fashion way.

One of the main impressing things of Docker is that it is reliable. The installation and setup of the Docker is same as the setup of the other computer programs like a text editor or the browser.

Docker removes the need of boot that the virtual machines use. Dockers will just allow the entire app to start and run in the virtual space at a faster pace.

Some Cons of Docker

Docker is developing at a faster pace. In the documentation of the Docker, there have been some of the gaps, especially within the abstraction layer that is Docker for Mac and Docker for the Window.

If you need the basic information about the containers, then the commands used in the docker will help you. But if you looking for the advanced learning, then Docker can’t help you. There is the third party named CAdiviser that has good monitoring as compared to Docker.

Main features of the Docker

The followings are the main features of the Docker: