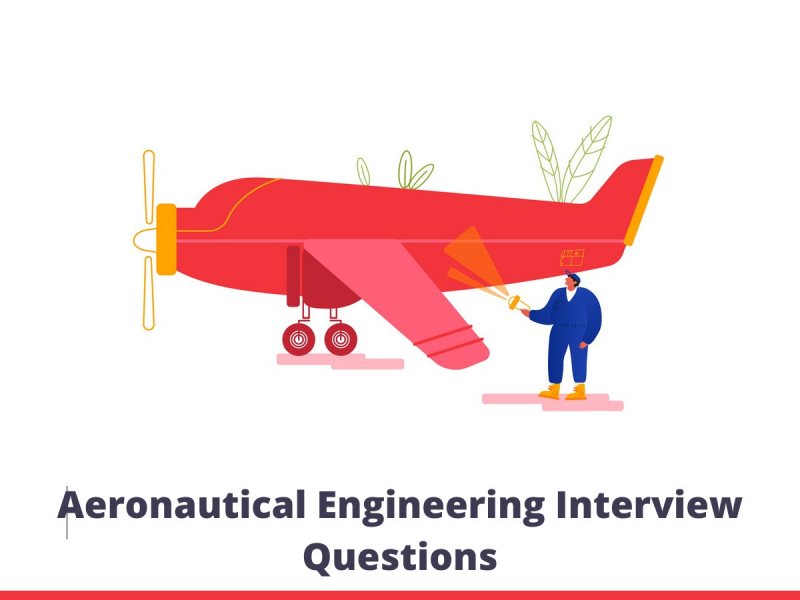 2) Why did you choose Aerospace Engineering?

Aerospace engineering provides the program to create a career in airplanes, rockets, and beyond. I have a very keen interest in it and therefore I opted for it. As aerospace engineers work on airplanes, space shuttles, satellites, and even missiles. It needs advanced training in mathematics and physics and I have a passion for this.

3) What is difference between Inviscid and Viscous flow?

In viscous flow, the substance's viscosity is essential, whereas, in inviscid flow, viscosity does not play any role.

4) What is the main function of propulsive thrust in aircraft?

Propulsion is defined as pushing forward or driving a thing forward, and a machine that produces thrust/force to push the object is called a propulsion machine. In airplanes, the propulsion is generated with the help of gas or fluid. An engine in the airplane accelerates the gas, and in reaction to it, acceleration produces a force on the engine. The amount of thrust produced depends on mass flow and the exit velocity of the gas. Thrust is applied by using Newton's third law of motion. Its SI unit is Newton.

There is four major propulsion system, which is mentioned below:

5) What are the laws of gyro-dynamics?

Gyro-dynamics is used to deal with gyroscopic motion, which is very important to create an aircraft application. In gyro-dynamics law, properties of rigidity are explained. In simple words, even if the gyroscope changes location, the axis of the spin will not change without the external force.

► If a rotating body is mounted and freely moves about an axis that passes through the center of mass, then the spin axis used will remain fixed in inertial space without displacing any of the frames.

6) What is continuum flow and free molecule flow?

Before describing the continuum flow, it is reasonable to know the meaning of the Knudsen number. Knudsen number is the mean free path of a fluid molecule divided by the length of the section in which the fluid is flowing.

Continuum flow is that flow that approaches zero Knudsen number. It can be achieved when the mean free path of a fluid molecule is tiny, or the section is enormous.

Free molecular flow is a type of flow in which the mean free path of the gas molecule is larger than the chamber.

7) What is yawing Motion?

A yawing rotation is the movement of a solid object either to the right or left of a yaw axis. In an airplane, the Yaw axis represents the airplane's coordinate, which is perpendicular to the wings in direction.

8) What are main areas of Aviation?

Aviation is now an important aspect that plays a major role in several sectors. Some of the main areas of these sectors are :

9) What is the main source of power in Aircraft?

The aircraft's primary source is an aircraft electrical system containing all the systems to produce, transmit, distribute, utilize, and store electrical energy.

The primary function of the electrical system is to generate electricity. The electrical system uses either a generator or an alternator. The power can be modified further with components like transformers, inverters, and rectifiers to change the voltage or current. The output of the generator is 115-120V/400HZ AC, 28V DC, or 14V DC-in most of the aviator.

A strain is defined as the length change ratio to the original length when the load is applied. Based on the type of loading, a strain can be divided into three types.

Normal strain - Normal strain is measured by dividing the change in length by the original length. It tells the relative amount of deformation in the structure due to the force applied.

Shear Strain - It is described as a ratio of change in tangential angle in the direction of the force applied.

Volumetric strain - It is described as the volume change ratio to the original volume.

11) What fuel is used in aeroplane?

To power up the aircraft, aviation uses fuel-based petroleum or synthetic fuel blends. These fuels have better qualities than fuels used for ground use. Some additives present in it are essential for enhancing properties necessary for fuel performance handling. In civil aviation, the turbine engines use Jet A-1 and JP-8. It is light kerosene-based fuel.

12) List some lift augmentation devices used on an Aircraft?

The most important lift augmentation devices used on an Aircraft are flaps, Kreuger flaps, and slats. There are also some devices that are less commonly used for, e.g., leading-edge root-extensions and boundary layer control devices.

13) What is the difference between aerodynamic balancing & mass balancing?

Aerodynamic balancing is used for the measurement of the forces exerted on the surfaces of instruments exposed to flowing air; frequently used in tests made on models in wind tunnels. Whereas in Mass balancing the flutter occurs when the control surface is displaced from its intended deflection. Because the ailerons are on long, narrow wings which can twist under load, they are the surface most prone to oscillate.