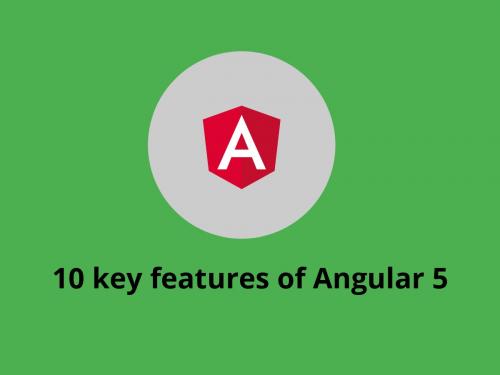 Angular JS has been in the industry for quite a few years with micro updates. However, the release of Angular 5 came as a surprise to everyone who knows its importance.

With the recent and newer Angular 5 release, the framework is the not the same anymore. Angular has the bad omen of frequently changing too many things in the updated versions of their software. And yes, it is a good omen for them this time.

Let's discuss the top-notch features added to the latest version of the Angular framework, which did make the industry go crazy.

Some the noticeable features of angular 5 that weren't available in the previous versions, which was hindering the framework are now available, making it much more easy to work with.

However, this Angular 5 is based on TypeScript and not JavaScript which could be considered as a slight drawback.

Valiant features of the Angular 5

Data binding removes the most tedious job of writing a lot of codes. 80% of the coding is dedicated to traversing, manipulating and listening to the DOM, but data binding makes this code disappear.

Templates here could be considered as a plain old HTML. With browser parsing of HTML templates into the DOM, it will become the input to the compiler. This creates a tight workflow between the designers and developers.

MVC is not implemented in the traditional way in Angular JS but it is used in a different manner – Model-View-View-Model. Model and View model will be controlled via a Controller in setting initial state and augmenting with methods to control behavior.

This feature helps the developer to build, understand and test an application with ease. Without the need for searching a dependency, you could just ask the DI to provide it for you.You have an option to customize your own injections and make those available when needed.

Directives allow you to create custom HTML tags that serve as widgets on the browser. Another application of directives would be the 'decorate element' and manipulate DOM attributes in various ways.

Applications load quickly with the component router since code splitting is automated. Users can only load a part of the code which will process their request faster.

Validation is an important part of creating an excellent user experience. Angular 5 gives you the freedom to declare the rules for form validation even without a JS code.

Localization is by far the most serious issue for applications. Angular locale aware filters and directives give you building blocks to make your application available in all locales.

Always tracks the Child-parent relationship even without inheritance.

With the framework and its features, you certainly need a testing tool to know the current data and statistics of the application. An inbuilt testing tool has been provided to you; you could use all these features to exploit the framework.

These exclusive features did drive me crazy since it is what I have been looking for quite some time. All those hindrances that you used to face in the previous versions have been blown away, leading a limitless potential of making your projects more fruitful with Angular 5.