Kotlin Vs Flutter. What is difference? 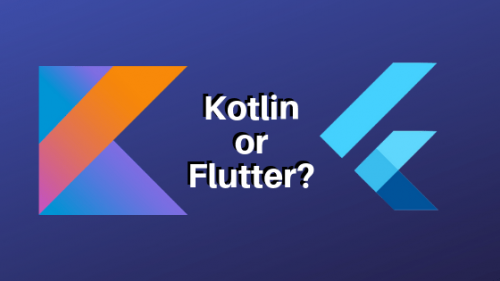 Developers explain Flutter as a "Cross-platform mobile framework from Google". Flutter is a mobile application SDK to help developers and designers make modern mobile apps for iOS and Android. On the other hand, Kotlin is described as a "Statically typed Programming Language targeting JVM and JavaScript". Kotlin is a statically typed programming language for the JVM, Android, and the internet, 100% interoperable with Java.

Kotlin has managed to gather a large user base and has gained popularity in a very short span of time. What started as a simple solution, taking Kotlin in 2017 forward, the Android industry today is ready for the mass adoption of the Kotlin language. In a very short span of time, a statically typed programming language from JetBrains known as Kotlin caught the attention of the Android community. This new programming language has allowed developers to convey the same intention using fewer characters and keywords than Java, without losing clarity and understanding.

Below are the benefits of using Kotlin Programming Language:

The most thrilling features of Kotlin are: It is expressive; concise; and way too powerful. It is capable to exchange and build use of data with the Java programming language. Also, with an existing Android runtime environment.

For instance, share the success stories built from fortune 500 companies to startups, with Kotlin - Netflix, Udacity - the online learning app, Evernote, Pinterest, and Slack. As the world is updated, now it's your turn to improve with the newest trend of Android App development technology.

Kotlin is a statistically typed open-source programming language, just like Android under Apache 2.0. It is completely supported in Android Studio 3.0 and the higher version of this. This thing has widened the task of developing a new application with Kotlin files in a simple way. You can write Android apps for Kotlin. Add Kotlin files to your present project and convert Java to Kotlin. Then you have the right to utilize all of the android studio's existing tools with your incomplete Kotlin code, for example, debugging, link checking, and so on.

Now, the big question is why you should choose Kotlin over Java because Java is the favorite of many developers when it comes to Android app development. Therefore, I am also sharing some of the strongest advantages of Kotlin in comparison to Java. By the end of this article, you will have a solid grasp of exactly what Kotlin has to offer and will know whether it's right for you or not.

Flutter is a mobile app SDK that allows you to write an app in one database and compile to both Android and iOS OR take it as Google's portable UI toolkit for structuring natively compiled applications for mobile application, web, and desktop from a single codebase.

Below are the benefits of Flutter:

Flutter is in a trend in the mobile development world. Its popularity can be estimated by the fact that within a year it has gained a lot of popularity and has already been adopted by some of the most famous companies such as Google Ads, Alibaba, Birch Finance, Hamilton Musical, App Tree, and many more.

If you observe the flutter app development platform from the perspective of a developer, it still lacks some aspects. That's the reason many developers prefer to utilize other platforms. However, if you observe from the perspective of a business owner, this platform can be of great help. It is less time-consuming, cost-effective, and provides reliable apps for both platforms.

Flutter is absolutely a good option to create applications for Android and iOS. But right now it is too early to differentiate between flutter with Kotlin. Kotlin is far more mature than Dart and Flutter.