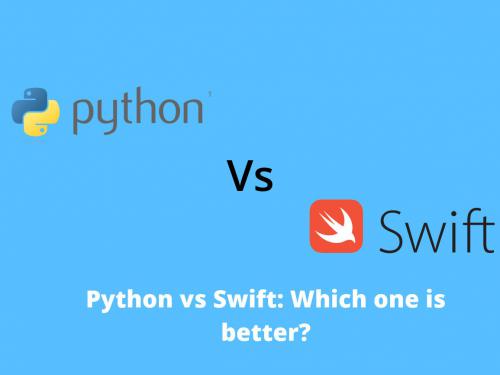 You have to be 'Swift' to catch up with a 'Python' in the real world, isn't it? How else would you match up the venomous snake? Well, that's not limited to how it is only in the real world. In the world of synonymously named programming languages, it is exactly the same way happening. Nature at work? Or smartly named coding languages? Well, that isn't for me or you to decide! What I am going to write in this blog is how the two languages are different in their own ways.

Before I begin, I must give my readers a brief idea of the two languages and their nitty-gritties.

It is important to learn the coding languages that are presently in-demand programming languages. Python is one such language. One of the most interesting thing about Python is that it resembles the English language and is, therefore, easier on the part of the learner to get a hang of it. Keywords like 'in', 'not' are used and reading out the code to someone doesn't make the listener feel like you are speaking some arcane language. Also, Python doesn't have curly braces all over your code. Its simple and straightforward syntax could be enough reason for a beginner to start off his/her coding career with the language that will very soon dominate entirely. Python has a set of rules called PEP8, that tells you how to format your code so you would always know where to do what and thus every other Python code that you see, whether it's been written by a novice or by an expert professional, will be just as easy to read. The very fact that your code and Mr. Rossum's would look similar gives you the necessary headstart to pursuing coding altogether!

It is a high-level language and was created by Mr. Guido van Rossum in the late 1980s. The language is named after the sketch comedy group 'Monty Python' Python was conceived in the late 1980s, and its implementation began in December 1989 by Guido van Rossum at Centrum Wiskunde & Informatica (CWI) in the Netherlands as a successor to the ABC language (itself inspired by SETL) capable of exception handling and interfacing with the Amoeba operating system.

What is Python used for:

Python has rapidly become an indispensable part of the industry. Python is used for many purposes. It is used by people all over the world in almost every discipline. Microchips are tested using Python at Intel, and it also powers Instagram, the hugely popular social media/photo-sharing application, YouTube, Reddit and Pinterest as well.

Advantages of Python over other programming languages:

Python has been around for a couple of decades and the codes written in this entire time has been released for other developers to use, it is an open-source programming language. Interestingly, the codes are all there on 'pypi.python.org' or more commonly known as 'The CheeseShop' in the community. Simply install the software on your system and you are good to go. There are libraries for any use case that you may come up with, be it some sort of server automation, manipulation of images or some scientific calculation. There is a Python framework for web apps as well as data analysis.

Python's standard library supports many internet protocols such as HTML, XML, JSON, and support for FTP, IMAP and others protocols. The best thing is that the package index has libraries, such as;

The rank of Python in the world of coding:

Python has been on a roll lately, having been named the number one or dev tool of any kind in a survey conducted by Packt Publishing. Also, the Red Monk Programming Language Rankings listed it as No. 3, behind only JavaScript and Java. It also has been growing in popularity in other studies, including the Stack Overflow Developer Survey.

It has also topped the IEEE Spectrum- a magazine associated with the organization that used to be generally called the Institute of Electrical and Electronics Engineers “The 2017 programming languages” ranking, which differs from other similar indices in its methodology and ability to provide interactive orderings based on user weighting. IEEE Spectrum places it ahead of C, Java, C++, and C# in the default ranking designed for the typical reader.

But, nothing lasts forever and no one thing can maintain its hold on the topmost rankings forever-including programming languages. What seems like the future of computing today may be tomorrow's footnote, whether deserved or underserved.

Python, currently riding high on the list of languages to know, seems like a candidate for near-immortality at this point. But other languages are showing that they share Python's strengths: convenient to program in, decked out with powerful ways to perform math and science work, and arrayed with a huge number of convenient third-party libraries. And the language is biggest competitor as of now is Swift, an Apple Inc.-developed programming language. So, let's dive jump out of Python and dive right into the world of Swift!

Swift, by Apple Inc. is a multi-paradigm, programming language, developed mainly for iOS, macOS, tvOS, and watchOS (basically all the Apple Operating Systems) but is now open-source and shaping up to be of interest for server-side development as well. Swift is designed to work with Apple's Cocoa and Cocoa Touch Frameworks.

The development of Swift started in July 2010 by Chris Lattner, with the eventual collaboration of many other programmers at Apple. Swift took language ideas "from Objective-C, Rust, Haskell, Ruby, C#, CLU, and far too many others to list including Python. On June 2, 2014, the Apple Worldwide Developers Conference (WWDC) application became the first publicly released app written in Swift. A beta version of the language was released to registered Apple developers at the conference, but the company did not promise that the final version of Swift would be source code compatible with the test version. Apple planned to make source code converters available if needed for the full release.

It is built with the open-source LLVM compiler framework and has been included in Xcode since version 6. On platforms other than Linux, it uses the Objective-C runtime library which allows C, Objective-C, C++ and Swift code to run within one program.

What is Swift used for:

Advantages of Swift over other programming languages:

The number one advantage to choosing Swift is arguable because of its clean syntax, which makes it easier to read and write. The number of code lines needed to implement an option on Swift is a lot fewer than for Objective-C. The reason for this is that Swift drops many legacy conventions, such as semicolons to end lines or parentheses that surround conditional expressions inside if/else statements. Another major change is that method calls do not sit inside each other resulting in a bracket mess. Instead, the method and function call in Swift use the comma-separated list of parameters within parentheses. As a result, the code is cleaner with a simplified syntax. Swift code more closely resembles plain English, which makes writing code more natural while enabling developers to spend far less time looking for problematic code. This readability also makes it easier for existing programmers from JavaScript, Java, Python, C#, and C++ to adopt Swift into their toolchain.

Rank of Swift in the world of coding:

RedMonk has been compiling quarterly rankings since 2011 and says that Swift is the fastest-growing language it has seen in that time. The company said that it's a particularly impressive achievement to tie with such a well-established language in just four years. The apprentice is now the master. Technically, this isn't entirely accurate, as Swift merely tied the language it effectively replaced – Objective C – rather than passing it. Still, it's difficult to view this run as anything but a changing of the guard.

In the world of coding, in which it's incredibly difficult to break into the Top 25 of language rankings, let alone the Top 10, Swift managed the chore in less than four years. It remains a growth phenomenon, even if its ability to penetrate the server side has not met expectations.

Facts You Must Know About DJANGO Python: DJANGO- THE FRAMEWORK BY PYTHON Django is a free and open source web application framework, written in Python. A web framework is a set of components that help..

Python has been around for a couple of decades and the codes written in this entire time has been released for other developers to use, it is an open source programming language. Interestingly, the co..