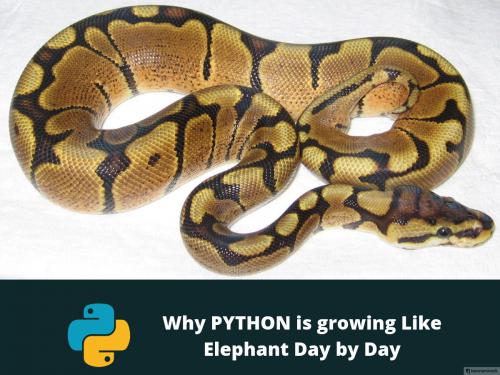 Why and how PYTHON is growing rapidly

They say, "The programmers of today are the wizards building the future". To be able to actually come up with an idea and then see it in your hands and then be able to press a button and have it be in the hands of billions of people is nothing short of possessing amazing magical powers to change the world. Coders are artists as writing codes is entirely a logic-based creativity. This article shows you why and how Python popularity is increasing day By day.

In order to be a great coder, knowing as many coding languages as you can is really important. What's even more important is to learn the ones that are presently in-demand programming languages. Python is one such language. It is a high-level language and was created by Mr. Guido van Rossum in the late 1980s. The language is named after sketch comedy group ‘Monty Python'. Python is used for many purposes. It is used by people all over the world in almost every discipline. Microchips are tested using Python at Intel, and it also powers Instagram, the hugely popular social media/photo-sharing application, YouTube, Reddit and Pinterest as well. Python has rapidly become an indispensable part of the industry. One of the most interesting thing about Python is that it resembles the English language and is, therefore, easier on the part of the learner to get a hang of it. Keywords like ‘in', ‘not' are used and reading out the code to someone doesn't make the listener feel like you are speaking some arcane language. Also, Python doesn't have curly braces all over your code. It's simple and straightforward syntax could be enough reason for a beginner to start off his/her coding career with the language that will very soon dominate entirely. Python has a set of rules called PEP8, that tells you how to format your code so you would always know where to do what and thus every other Python code that you see, whether it's been written by a novice or by an expert professional, will be just as easy to read. The very fact that your code and Mr. Rossum's would look similar gives you the necessary headstart to pursuing coding altogether!

Python has been around for a couple of decades and the codes written in this entire time has been released for other developers to use, it is an open source programming language. Interestingly, the codes are all there on 'pypi.python.org' or more commonly known as ‘The CheeseShop' in the community. Simply install the software on your system and you are good to go. There are libraries for any use case that you may come up with, be it some sort of server automation, manipulation of images or some scientific calculation. There is Python framework for web apps as well as data analysis.

Python's standard library supports many internet protocols such as HTML, XML, JSON, and support for FTP, IMAP, and other protocols. The best thing is that the package index has libraries, such as;

There's a poem by Tim Peters named, "The Zen of Python" which is an interesting read. All you have to do is write "import this" in the interpreter and bingo the poem shows up! Yes, you never must have even imagined that this could be true.

Python is capable of returning multiple values. "Else" could be used with "for" loop in Python. It executes only if the for loop exits naturally without "break." Python doesn't use Pointers and everything is done by reference.

There's the unique feature of function argument unpacking using something called the Splat operator using * and ** respectively. You can find the index inside a ‘for' loop using ‘enumerate' and it gives the item along with its index. Also, very conveniently comparison operators can be chained.

Doesn't the scientific community say infinity can't be defined? Well, not the case on Python! Here, you can use #positive infinity and #negative infinity in your code. List comparison can be used instead of building a list with a loop.

Do you need to get items from the list? Even that can be done using the 'Slice operator'. And, two or more literals (enclosed in quotes) gets automatically concatenated.

So, there are so many reasons for one to love Python and as expected, its popularity has been on the rise in the last 15 years or so.  Over the years, a lot of major and minor versions of Python has been released. The implementation that started in December of 1989 during Christmas has been followed up by four major updates with six minor updates on an average right from Python 0.9.0 in February 1991 to version 1.0 in January 1994 to version 2.0 in October 2000 to version 3.0 in December 2008. The last minor update has been Python 3.6 released on December 23rd, 2016.

You have to be 'Swift' to catch up with a 'Python' in the real world, isn't it? How else would you match up the venomous snake! Well, that's not limited to how it is only in the real world. In the wor..

Facts You Must Know About DJANGO Python: DJANGO- THE FRAMEWORK BY PYTHON Django is a free and open source web application framework, written in Python. A web framework is a set of components that help..