All you need to know about Node JS ORM 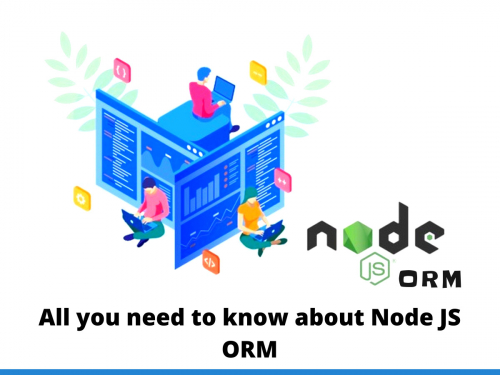 JS or Javascript is a client-side as well as a server-side scripting language that runs on web browsers and servers too. On browsers, javascript is used for implementing dynamic visual effects or logical operations on the web page and on the server from creating web services to completing the website.

Like human language, this scripting language JS also went through many major and minor evolutions since its origin. Over the past few years, Node js become one of the most attractive and popular Javascript Frameworks all around the world that is a free open source cross-platform.

However, you are on the right page if you do not have an idea of what Node JS is and why it is used then it is all about that. Let us now discuss all the related points one by one for better understanding:

To be simple, Node JS is the server-side programming framework that allows the developers to build servers and other networks using javascript for the first time. This is also a runtime environment – an open cross-platform that easily allows the developers to test any software program, clearing any bugs and errors while it is still running. It gives a brief idea of how that particular software might work or behave once it is been executed. In simple words, Node JS helps to execute Javascript directly on the system without using any browser.

Javascript programmers can use Node JS to build various network programs or servers, real-time data-intensive applications along with real-time web APIs. The reasons for its popularity are the speed and the ease to use features that make Node JS perfect for most of web server applications.

Below are the few advantages that come from Node JS:

What is ORM in Node JS?

ORM tool or Object Relational Mapping tool is a computer programming technique or a framework that is used to map, convert and manipulate an object or data to that of a relational database in your computer. ORM is such a computer science technology that helps developers in maintaining a steady view of the objects even when the sources and applications they access tend to change over time. In the world of computer programming, Java professionals previously used the techniques of JDBC for data persistence that only includes writing and executing SQL statements to update particular data in the database. Although this JDBC approach was quite popular, the SQL statements were difficult to read, write and troubleshoot.

ORM or commonly known as Object Relational Mapping flourished into the picture to make computer programming easier with fewer mistakes. Professional developers can easily build an object model without writing any kinds of SQL statements and they convert or retrieve the data from the database and transfer it into the object model they have made. This is how ORM works precisely.

Pros and Cons of using ORM in Node JS:

In this technical world, everything has its own advantages and disadvantages no matter how perfect the system looks. Similarly, there are few major pros and cons of using ORM in Node JS. Let us now discuss all the primary pros and cons below:

Best Node JS ORM that you can use in your next project:

Moreover, the best part is even if you have minimum knowledge regarding JavaScript still it will not take much time to learn Node JS, work with it and be a maestro in it. It the right time to start adapting the new things in life and learn Node JS as it has become widely popular among the coders from every corner of the world.

How to enable cors in Node js

Cron Jobs are used for scheduling tasks to run on the server.CRON Jobs are the most commonly used method to automate tasks on Server. In this article, we will see how to schedule Jobs in Node.js. We a..