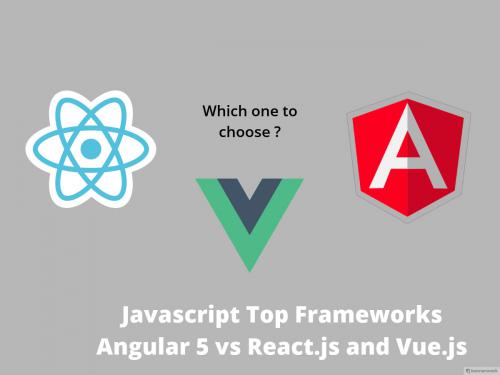 Web development has been exponentially growing day by day due to various frameworks, UI interfaces and templates being developed. The user and developer interface has features that you could exploit to a very large extent.
JavaScript has a number of frameworks and libraries with a variety of functions and features, some specific and some with most of the features embedded.

Today we will talk about 3 such Javascript frameworks and interfaces for front end developers, compare their functions and features to know which would be better out of the three or which would be best in various circumstances.

Before I start comparing, I would like to point out a few questions that are suitable for your framework/libraries for your project:

Keeping these things in mind, you will need to decide the framework or interface or libraries that you need to choose.

Angular 5 is a JavaScript (TypeScript) framework used to develop websites for desktop and mobile applications. This has various features out of which, I will list out the new ones in the updated version.

There are some cons to this framework too which you would need to know before making your choice.

React is a library used for JavaScript in user interface development but there is a common misconception about React being a framework.

With real-time update and render of appropriate components when the data changes in a productive way. With encapsulated components being built, you could avoid a complex user interface.

React has excellent features such as:

There are a few things you need to know which could affect your work in a bad way. You would need to know before you choose it:

Vue.js is another framework which is relatively smaller and a new to the web industry. This is a combination of both Angular and React features; taking the best out of the two and making it a new box called Vue.js.

With a versatile build, this cannot be categorized as a proper framework or library, but a combination of both, a hybrid if I may say.

We know what is Vue, but we need to how helpful is it with our work. Some of the excellent features are:

There are a few bad ones along with the good features. They are:

With all the information out on the table, it is your decision to select the right framework or library or both to use it in your project. In this article, you have read about react vs angular 2 two most popular frameworks of Javascript.

Javascript Vs. Typescript: JavaScript and TypeScript are reputed and much debated over topics among web developers. Instead of discussing the pros and cons of these two languages. Here are few Differe..

Top 5 JavaScript Frameworks to learn in 2022

JavaScript is the latest buzz in the web development industry that is extensively used by developers to develop sophisticated web applications that will be having rich client-side interactions. There ..

A glance at Deep and shallow copy in JavaScript

In object-oriented programming when we create a copy of an existing object, we call it as Object copying. The most common ways to copy an object is by using either a copy constructor or cloning. In Ja..