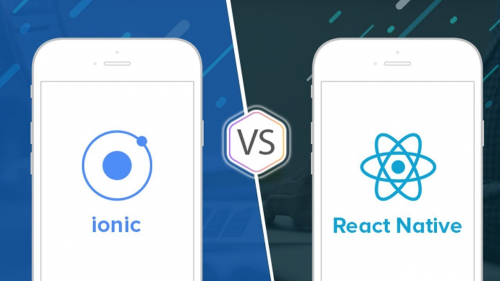 Before we start our discussion over React Native Vs Ionic 4 Framework, here's something important you should consider. Ionic 4 is a framework for hybrid mobile application development and React Native is a cross-platform framework to make native apps.

Here we have written a complete article on React Native vs Ionic 4 to help you understand the primary differences between these two frameworks along with their benefits.

What is React Native Framework

The React Native is the latest technology that is receiving all the attention. Previously, the companies had to create two different apps for iOS and Android from scratch using different programming languages. With react native, you need to write code in one language that is JavaScript and port the same to other platforms allowing you to save time and cut down on cost.

What is Ionic Framework

Ionic 4 is one of the greatest frameworks when it comes to developing applications. With Ionic & Capacitor bringing changes to the framework, it is certain to spearhead the hybrid movement for an improved future. Being a Mobile App Development Company, Biztech Consultancy has developed Ionic Application with codes that are clean and compatible with Ionic guidelines.

Ionic 4 and React Native both are meant for the same purpose but different project requirements. If you are searching for responsiveness, performance and want a natively rendering app, there’s no doubt React Native is the one for you. On the other hand, if you are low on time, budget and looking for support of Native Browser apps and fine with compromising performance, then go with Ionic 4.