What is notepad in computer? 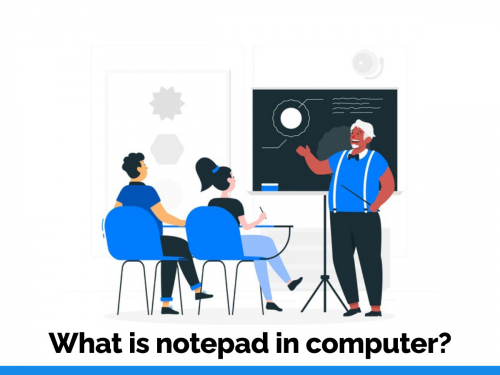 Notepad in Computer is a simple text editor for Microsoft Windows and a basic text-editing program that enables computer users to create documents. It was first released as a mouse-based MS-DOS program in 1983 and has been included in all versions of windows since windows 1.0 in 1985. Notepad allows you to create, open and read plaintext files, if the file contains special formatting or is not a plain text file, it will not be able to be read in Notepad.

Notepad in Windows 10 has the following features;

Shortcut to deleting previously typed words;  firstly, you can use a simple shortcut ctrl+Backspace to delete a previous word you typed or entered.

Status bar; It is visible at the bottom of the notepad screen and displays the ending line of the text file in use. Alongside it, you can find information related to column and line numbers with word wrapping and current zoom level. The status bar itself is enabled by default.

Wrap-Around; Earlier, Notepad had certain limitations. for instance, you could only search or replace text using a single word. However, now you can find a new wraparound option visible under the find tool to search for a fragment of a text. Notepad will save previously typed values and checkboxes and automatically apply them when you re-open the find dialog box.

Text Zooming; It has also added options to quickly zoom text in Notepad. So, when you attempt to change the text layout, you can notice the zoom percentage on its status bar.

Search with Bing in Notepad; The New notepad enables Windows 10 users to quickly find the meaning or spelling of a word within the app.