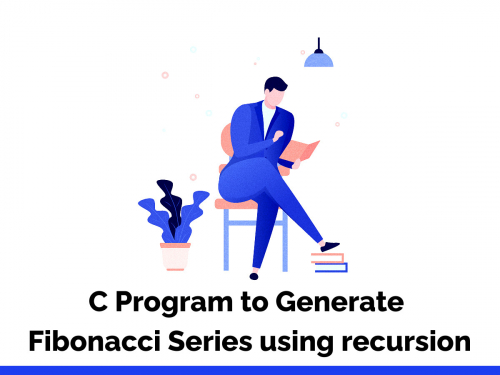 What is The Fibonacci Series?

Fibonacci Series is a series of numbers in which each number (Fibonacci number) is the sum of the two preceding numbers. The simplest form of the Fibonacci series is 0, 1, 1, 2, 3, 5, 8, etc.

How to Generate Fibonacci Series?

Recursion means a function calling itself.

What is the working principle of the Fibonacci Series?

The Fibonacci series or sequence works on the principle in which each term is the sum of previous two terms”. Therefore, two sequent terms are added to generate a new term. The process continues till the last term of the series is obtained. Fibonacci Series is a set of numbers that starts with a one or a zero, followed by a one, and proceeds based on the rule that each number (called a Fibonacci number) is equal to the sum of the preceding two numbers.

The nth term  known as Fibonacci number of Fibonacci series is calculated by following formula:

The recursive function to find nth Fibonacci term is based on below three conditions.

When the above code is executed, it produces the following results:

In this Program, we first takes the number of terms of Fibonacci series as input from user using scanf function. We are using a user defined recursive function named 'Fibonacci' which takes an integer(N) as input and returns the Nth Fibonacci number using recursion as discussed above. The recursion will terminate when number of terms are < 2 because we know the first two terms of Fibonacci series are 0 and 1. we are calling this function inside a for loop to get the Nth term of series.