As we know that time is the most important concern in our life. To do any task easily, We have to use software to perform it in a simpler manner. Software is a set of programs with related documents. The Software Program or Program is a set of instructions to do a specific task. First, of all, I want to explain What is Number System? Then, I will explain What is a Decimal Number? Furthermore, I will explain What is a Binary Number? After that, I will write the logic for conversion between Decimal to Binary numbers as a C Program.

What is a Number System?

What is a Decimal Number?

What is a Binary Number?

What is a Program?

A Program is a set of instructions to perform a specific task. A Program tells the Computer What to do? And a Logic tells the computer How to do it? To Write a Program We will construct our own logic related to the task.

Demonstration of Conversion between Decimal to Binary Number.

Example: Conversion of Decimal Number 24 to Binary Number that is 11000.

C Program that will convert the Entered Decimal Number to Binary Number.

Save this program with the filename and extension .c like filename.c. Then compile it on turbo C or another compiler.

Please! Enter the Decimal number to convert into Binary Number: 24 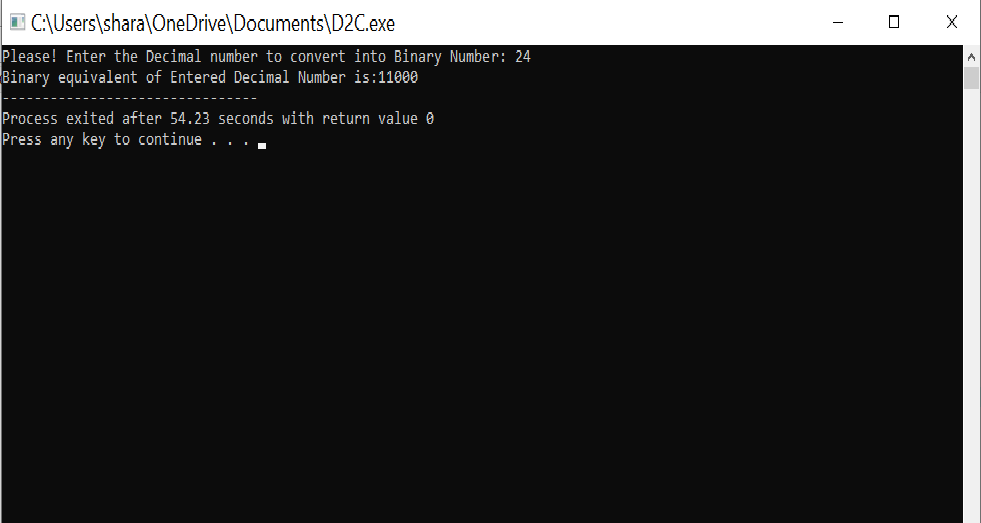 Conclusion: Explanation of This Program with output. The internal working of this program depends upon the previous demonstration of Conversion between Decimal to Binary Number.

This Program reversed any number such as Integer, float, or decimal in their equivalent. After the successful compilation of the program, a message is displayed on the screen as Please! Enter a string..